The comic is about toes. Also, bamboo. Technically it's about the interaction between toes and bamboo. 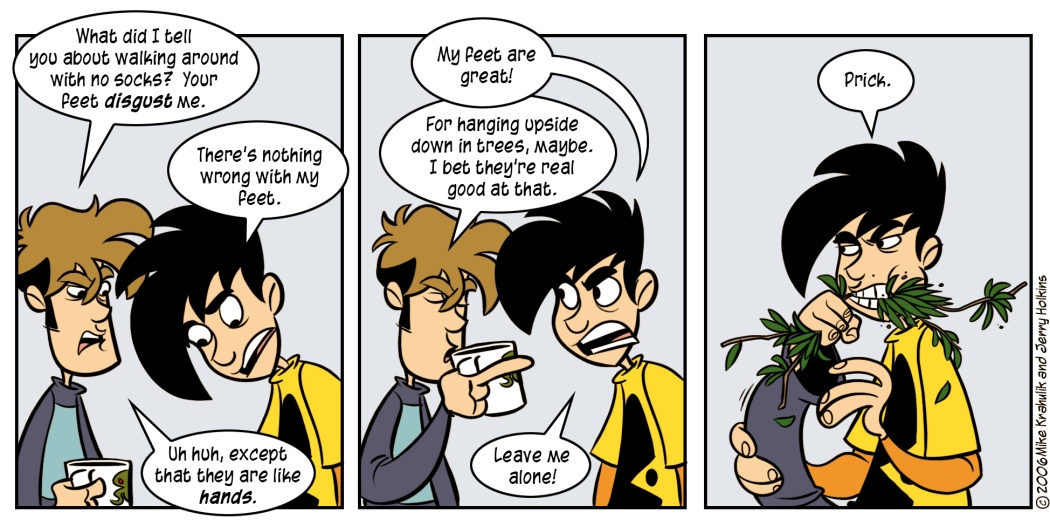 Came back from EB yesterday with Saints Row, Enchanted Arms, and Disgaea 2, along with the DoubleJump Guide for the latter - flip through one of their books sometime if you'd like to know why. They're the closest I've ever seen those products come to full on, GameFAQS-style, near Asberger's type fixation in guide form. Typically one needs to trawl online for this type of... well, dedication is probably too mild a word.

We actually had an embarrassing amount of possible strip material, and it was so voluminous that I might have been intimidated - after essentially running from these riches for the first part of the night on a series of contested Sal Kari dunes, I took my leave from the squad and turned to a pile of fresh-picked GBA product from Pinku Gojira. I set aside Coloris and Dotstream, lo-fi game experiments from the bit Generations line, and found myself practically strangled by the quality of Rhythm Heaven - a beatmatching game from the Warioware guys. It is pure and without fault like a new baby. Then, after failing to find an active game of Saints Row online, I found myself in the single player mode, which... Yeah, this is actually pretty good. Threw in Enchanted Arms, and I played it just long enough to see a gay man attack a prom queen with a magic saxophone. I decided to return to that one by the light of day.

Coming into the office, Disgaea 2 had already worked a spell of binding on Gabe, as did its predecessor (and the many "sorta" sequels). We spent a couple hours getting a map down so perfect that every square inch of it was our dominion. At this point I would discard my life for even one more turn.

One of the only unabashedly positive things to be said for the PS3 was that they had secured Assassin's Creed exclusively - but even at the event itself, rumors were already starting to fly that it would be a limited window of exclusivity. It turns out that this window is so limited that, in fact, it only applied to the three days of the convention: the game is hitting the PC and the Xbox 360 as well. There's an interview with the producer that doesn't cover a whole lot, but I think we've all seized upon the major points.

Also, when it was announced that Dark Messiah would be built using the Valve's Source engine, I said that if a publisher of Ubisoft's scale chose to deliver a title through Steam, digital delivery would quickly cease being a novelty. Well, that's happening. One sometimes hears that PC gaming is dead, and then you see something like what Valve is doing with Episode 2 and warmth spreads throughout your entire body - even if their bet is being hedged on next-gen systems. We know how good we have it. But try to find evidence of a strong PC platform at dedicated game retailers and the main thing you will find is that they have no interest in it. The games can't be traded in, and a PC gamer probably doesn't attach guides or peripherals to their purchases at the same rate, so it exists outside the philosophical continuum of their business. I'm aware that many gamers find Steam or other ethereal delivery methods distasteful, and I wonder how long they will have that luxury.

the power of the crab compels you