It's been made abundantly clear that Ten O'Clock is time for Rainbow Six. It is not time for other games! You might think that it is, but it isn't. Don't show up at 10:05! That's not when it is. 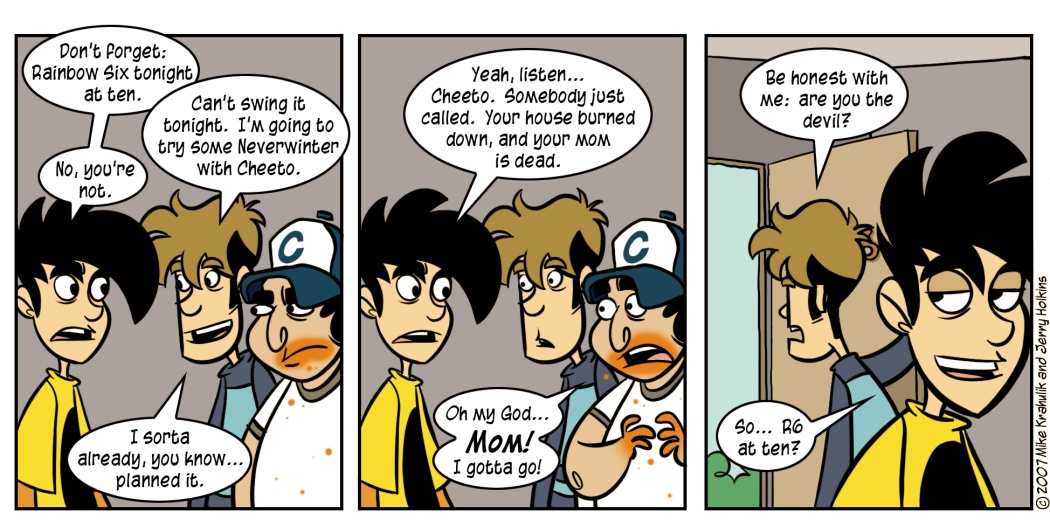 I'm ready for a breather, I think - R6 has been a nightly excursion for Team Inferno. Yes, Team Inferno. It isn't that Team Inferno is the name of the clan, it's that any team Gabe joins becomes Team Inferno. It's a mysterious process that isn't well understood. It's also the name of a Pokemon Guild, but I want to emphasize that we are not those guys.

You've probably heard the stories about Playstation 3's piling up "at stores near u" from message board gangsters like MastaCheef and T-Bag13, young men you pegged immediately as deranged Xbots, weighing their words accordingly. I scouted out our Best Buy at lunch and saw that they had three of the premium model products standing alone in the middle of the room, the way you might conspicuously place a box of free kittens for maximum uptake. Gabriel saw supply at Sir Friedrich Der Meyers as well, though nothing like those images you've seen online, where they're piled up to the ceiling and people are taking "crazy" shots in front of them.

I have to say that I'm kind of confused. I expected their sustained campaign of failure leading up to the release of the product to have no effect on the machine's sellthrough. Are there enough unsold units left over for the system to launch in Europe? I doubt that's the sort of humor they appreciate in Leeds.

Everyone is always quick to temper their dour assessments of Sony with a shining song of hope renewed, little blog ballads about how things will be awesome tomorrow, tomorrow for the hulking Sony dust magnet, but this isn't a thing you can actually know. We don't know if we're in the midst of A New Dynasty or Regicide. To answer the burning question, no, I don't think it's Bill Gates with the Candlestick in the Library. They don't have a genuine stable of brands, and I don't know that they have the patience to build them. And until Nintendo is able to conquer their novelty sugar rush - "It feels like I'm really sweeping!!!" - and deliver content that truly endures, I'd call the prognosis murky.

you told me you were scared