Gabe keeps coming into the Goddamn office with his Goddamn tales of high adventure, telling me about how there's tokens or some shit in Burning Crusade now, or maybe tiers, and other words I had scoured from my consciousness. He also says there is hot new five-man content, which initially sounded like pornography. The comic is correct - I purchased it in a moment of weakness. As I must often approach you, the cherished reader, to apologize for this or that indiscretion, it may be more appropriate to say that I have moments of strength which are suspended in cowardice and moral decay. 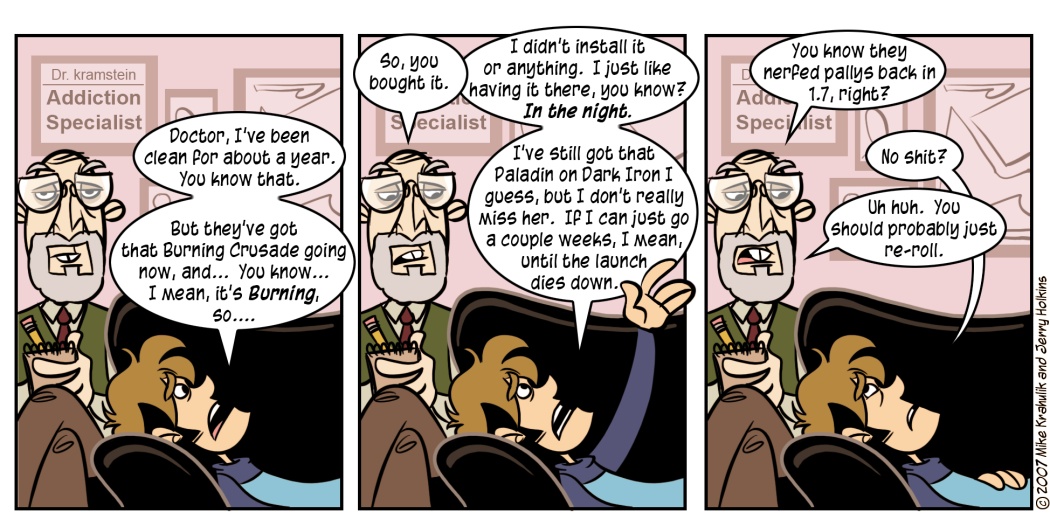 I fully expect that, by the parched summer months, I'll be shivering and panting in some closet muttering about mobs. I'm glad I bought it, and one day I will craft jewels etc., but I see no reason to hasten my annihilation. I'm going to enjoy my time on the "outside" before exchanging this earthly shell for its holy counterpart, the one which sleeps now in simulation.

I mentioned Hotel Dusk: Room 215 briefly in the last post, but I don't know how well known the game is - I've been trying to keep an eye on it since I saw it mentioned at 4cr. It's basically a videogame for people who like books. I'm trying to figure out if that's like a ballet for people who like masonry, but there's definitely something here.

I could tell you about the presentation, and I would probably enjoy doing so, but odds are good that I would begin to wax lyrical about the art and I don't think anybody wants me to wax. There is a lot of ratty-looking, low-res media bobbing around out there for the game, and I won't abide it: check out this presentation from the official site if you want to get an idea what kind of thing you'd actually be holding in your palm, sideways. It uses that Brain Age orientation that we're starting to see more of, I believe the new Meteos does it as well, and in Hotel Dusk it's more compelling than it has any right to be. If I turn my 360 on its side, the only difference is that now it no longer fits in my entertainment center. If I turn the DS on its side, I haven't altered the resolution - but I've altered the ratio, whose new height Hotel Dusk fills with beautiful hand-drawn portraits.

It's an adventure game, essentially, whose noir trappings even include a hard bitten ex-cop(!). You'll talk to people, learn things, solve puzzles, and get extremely frustrated, so you know we're talking about the right genre. It's from the same company that did Trace Memory, a game which wasn't especially well received but showed the first hints of a unique skill: offering touch-controlled scenarios that anchor the player in the gameworld.

It seems like the first Phoenix Wright sold ridiculously well, or perhaps it just sold better than expected, and now we've got another game that (at least, to my mind) slots into the same conceptual space. Phoenix gets by on its fun Courtroom+ setting and its impeccable writing, and Hotel Dusk is trying to get there with its mature tone and eloquent visual style.  I hope I'm not the only one who finds the idea of reading a game exciting, because a Silent Hill adaptation - literary, intricate, and haunting - could very likely change the world.

they all was crisp