I'm glad that we were able to discuss the news of a Warhammer 40k MMO without resorting to apocalyptic threats. I was able to present the idea to him by saying that they were making a Starcraft MMO, but they weren't going to call it Starcraft, and it wasn't being made by Blizzard. He was intrigued, but wary. 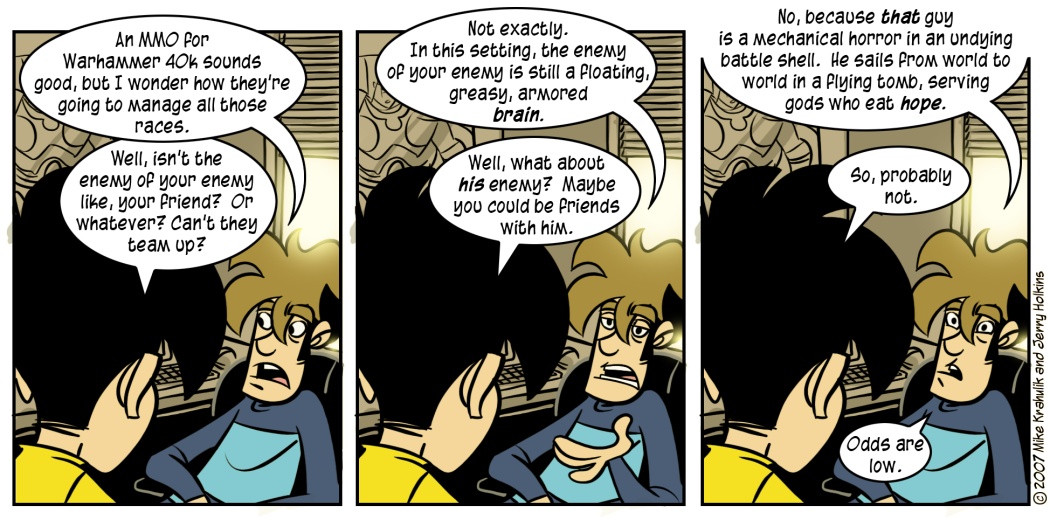 It is no longer surprising to people that Crackdown is actually pretty great. I wondered aloud in an earlier post whether or not the actual product could deliver satisfaction on par with the demo, whose greatly accelerated rate of advancement made every brief, time-locked play session a pyrotechnic extravaganza similar to the trailer for a summer blockbuster.  For the record: it does, in fact, deliver.

I've seen the odd ending cinematic while playing in a friend's co-op game, so wiping out the gangs has ceased to be a motivating factor. It's probably no consolation to the citizens of my own Pacific City that their indestructible champion was able to resolve their crime issues, he merely did so in an alternate universe. I'll need to word the press release very carefully.

There are things I don't like about Crackdown, but in an inversion of the classic usage pattern they bother me less the more I've played it. I wish the game's melee options consisted of more than a single kick. Pacific City is large, but there really isn't a lot of culture. Its four levels of power in each skill can be revealed pretty quick, if you've a mind to. I want to be super mad or whatever, but I can't muster it up. The game is pure urban revelry that at every turns invites the player to enjoy it.

(An aside: In the Volk area, "The Volk" being one of the game's three gangs, I borrowed a man's station wagon. "Borrowed" is, in this case, a euphemism. He was listening to Christian Rap in there, specifically Toby Mac, even more specifically a song by Toby Mac called "Extreme Days." In it, Mr. Mac suggests that the Lord told him to be "extreme" in what amounts to a troubling and extrabiblical eleventh commandment.)

It can be a good co-op experience, and I've had those moments, but there's so much to do at any given time and the city is so large horizontally and vertically that I practically avoid my nominal "partner." By the time I've done a rooftop race, crushed an innocent with a dumpster, and kicked a man off a roof I usually get a notification that whatever target they were after has been put down. I'm still all the way across town, and I don't care.

Eventually, I came to view the criminal element as chores: something my mother might yell from the top of the stairs, to be put off until another time. What I need to do right now, what's best for the city, is to set up a huge ramp and then jump over the highway in a stolen car. It's critical that this get done today. If you have a problem with that, I suggest you keep it to yourself. I can lift a garbage truck and I'm immune from prosecution.

and an old fashioned millionaire