Doki Doki Majo Saiban is a game for the Nintendo DS where the player - as a concerned citizen, presumably - must closely examine potential witches at your school. This analysis is performed with the stylus. We have produced a comic on the subject, in effect purging it from the mind, making a pure life possible. 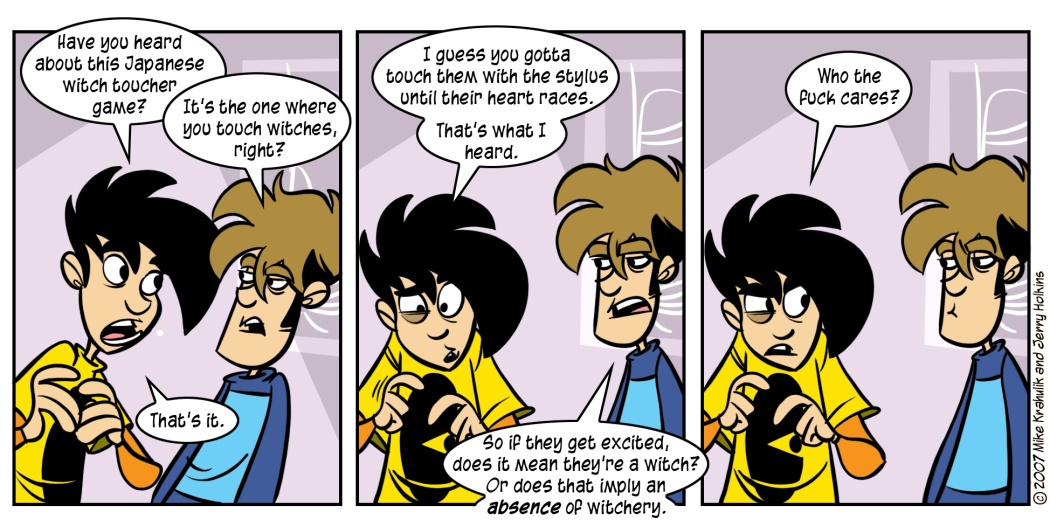 The forums for the new Bethesda interpretation of Fallout are now open, and the sound is like a hundred thousand bats shrieking as they swirl around a jutting spire of obsidian. When I speak with fervor on topics that interest me, do I sound like them? It makes a strong case for a monastic existence.

Acting as their own publisher, Bethesda has the power to do what Denis Dyack has (perhaps correctly) suggested is the optimal scenario: withhold materials from a game until a developer can show it on their terms. In practice, it has been like shaking a soda bottle continuously for more than a year, so that when an opportunity to relieve the pressure was presented the result is volatile.

The history of Fallout as a franchise has all the trappings of a spiritual epic, replete with false messiahs and long persecution. Those who still hew to this strange religion are quick to call out Bethesda's many crimes, but they have no idea what Bethesda intends to do with Fallout. No-one does. The forums must have gone up for a reason, let us hope we will soon have genuine facts to discuss.

You might have felt the earth itself buckle and sway Thursday evening, felt it lurch as our defeat by Amaze Entertainment was entered into the Great Book. They won seven matches to our one, with only Robert Khoo left standing. Thus proceeds our ping pong Circus of Shame throughout the game industry.

We certainly hoped for better. Earlier in the day we sharpened our steel on a succession of Nerdcore Rappers, making deep gouges in the fledgling genre. Wheelie Cyberman and his Optimus entourage, even the supposedly legendary MC Frontalot was sundered. We even took time out to defeat MC Lars, a man with whom we have no particular grievance. He was merely caught within the area of effect.

Let it be known:  four of their team's seven members are missing, and one insane. Of the remainder, one can no longer speak. The last is still at the table, his mind a ruin, shielding his face against a torrent of spectral balls that will not stop. Such is the destiny of those who raise weapons against our house - doom, in accordance with whispered prophecy. Dark words, yes, but also dark fates! Dark blades and dark nights without end for the foes of Arcadia!

i don't love you neither