Eye of Judgment is founded on a gimmick - but it's a great one, and the game they've built atop it is fantastic. If you like tactical games, CCGs, or tabletop wargames, you should turn your attention to it as a flower tilts toward the sun. We've provided a helpful list of the things you'll need to really get underway. The Hood of Gra'a'kul is not strictly necessary, but it does set the tone. 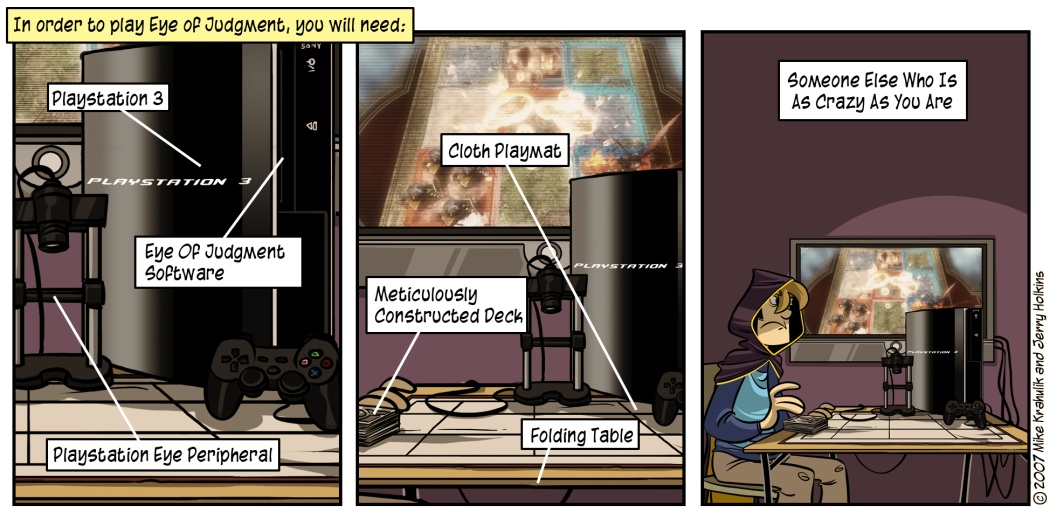 We should begin with a sample card, this-a-here Biolith Bomber.  Being a promo, it's probably not final - but we can learn from it.

There's a lot going on, but most of it is actually very literal - there are some ridiculous games in this genre, and this ain't one of 'em. Let's start at the top, and also, the bottom: these are the eldrytch symbols that tell the Playstation Eye what card you've played. Mostly, these cards consist of creatures similar to this one. They can also represent Fortresses, defensive structures designed to hold down a square or confer other benefits, spells that alter the game flow, and also "actions." Actions consist of gameplay commands like ending your turn or activating an existing card, nothing we really need to get into.  You could play a whole game without using either.

Moving on from the sigils at the top, you can see the first of four green triangles, used to determine a card's orientation. Then name, and to the left, a bunch of important shit. The large number is the cost (in "mana") to summon it. Three was pretty middle of the road in these decks, and since you only get two mana a turn (barring other factors) it's something you need to plan for a little. The smaller number is that card's activation cost, or the cost to use it again after it has been placed. Each creature gets a free attack initially, after that you need to pay the (presumably magical) piper. These two numbers are bound in chains for a specific reason. We'll get to it in a second.

Below all that is hit points and damage dealt per attack, and there's a plus by the attack value that is explained below on the flavor text. Not a bad card. The grids near the bottom communicate all the combat information - the left is telling us that this particular unit can attack in all directions, even multiple spaces out. The right is defensive information. Those grey squares tell you that any attack that comes from those directions will be responded to in kind. We saw cards that had squares marked with a B, indicating blind spots where attackers can deal hits without fear of reprisal.

This card is also a Biolith card, as denoted by the grey, gear-looking thing in the middle right. Biolith is one of the game's five elements, the other four being forest, water, stone, and fire. The game is played on a three by three board, every tile of which conforms to one of these types. Typically, when a creature is played on its own element, it gets two bonus hit points. Depending on flavor text, other benefits may also be conferred. Biolith cards are unique in that they get no such bonus - they tend to be a little tougher, or even a little weirder, than other cards. In fact, they can only be played on a Biolith tile at the start of the game, and there was only one of these on the board we were using - right in the middle. This is what those chains are about. Once five creatures are in play, this "lock" on placement breaks and Biolith creatures may be played anywhere.

The objective of the game is to have cards occupying five squares. When either player has four in play, their opponent is in "check" - unless you're able to destroy an enemy creature that turn, you stand a pretty good chance of losing. Gabriel got a reprieve in one game because all my cards were too expensive to summon, so it's not a guarantee, but klaxons should definitely be going off in your mind.

The board itself, as I've described, is elemental in nature - but each tile has a top and a bottom, and there are spells that can flip them over. The middle square that I mentioned is Biolith on top and bottom, so it's not as big a deal there, but if you're relying on a tile's bonus hit points (or you've placed a creature that can only survive on "forest" tiles), such shifts are front page news.

At this point, you know everything you need to know in order to play. It's easy to see how a card might actually face two separate ways in game terms, or (as in the case of these weird frogs I had, frogs who rode grasshoppers) a creature might jump the square next to it and attack one square away. Gabriel played a farmer - seriously, all he had was a rake - who might transform into a lizardman. I had a weird little guy who (provided he survived the round) would let me summon any creature to his square for free. I took that opportunity to summon a mechanical battle God, but to each his own. Gabriel saved his mana allowance for a big purchase, near the end: a vast red dragon who (when placed on a red tile) gets a really nasty attack that is almost free to use.  No-one asks him why he is hot, and no hip-hop "cuts" will ever commemorate it. He is hot because he is a three story lizard made of living fire. He has a rider, but it's hard to believe that tiny guy is calling the shots. I think he climbed up there many years ago, on some drunken fraternity dare, and now regrets this choice in absolute terms.

Online play, if you're curious, involves registering a legal thirty card deck to the system. When playing a distant opponent, the game knows your deck and "draws" your hand virtually, telling you what valid cards to pull. That's their system, and it's a little weird, but playing cards against someone you can't see in another country might be the ultimate cheating scenario. Desperate measures, and so forth. If the cards are registered and the draw is virtual, it sort of obviates the cards - right? - unless you're enforcing card ownership, which they most certainly are. It's a little weird, but they're trying to manage a pretty unique scenario.

Would the game play just as well without cards? Absolutely. But the physicality of card placement and interaction has its own virtues. Cards are recognized in a second or less, so watching them transformed is actually a very interactive, exciting process. You don't actually need the PS3 to play it - the game can be played on a regular table without any electronic accompaniment. But you'll probably find, as we did, that having a perpetually available neutral arbiter who will track all numeric systems is pretty convenient.

As a cool Augmented Reality play by Sony and Hasbro, the whole thing is just kind of... noble. I say noble, because I'm not sure it will find a home in either camp - the dedicated electronic gamer, or the CCG enthusiast. It should, I believe it should, because it's a solid product that bridges those disciplines in a unique and satisfying way - but this idea is much bigger than Eye of Judgment. When you consider what this could mean for the tabletop, I think we may rightly call this The Beginning.