This is today's comic, which represents an authentic conversation between my son and I.  There really should be some kind of licensing requirement for procreation.

Today's post is from Joel DeYoung, who worked on The Simpsons: Road Rage and The Simpsons: Hit and Run.  He's on over at Hothead now, working on our shit, but this post isn't about his contributions to the regular industry:  it's about his incredible work on SquawkBox.  What is that?  Well, you'll find out soon enough.  I couldn't believe I'd never heard of it before. 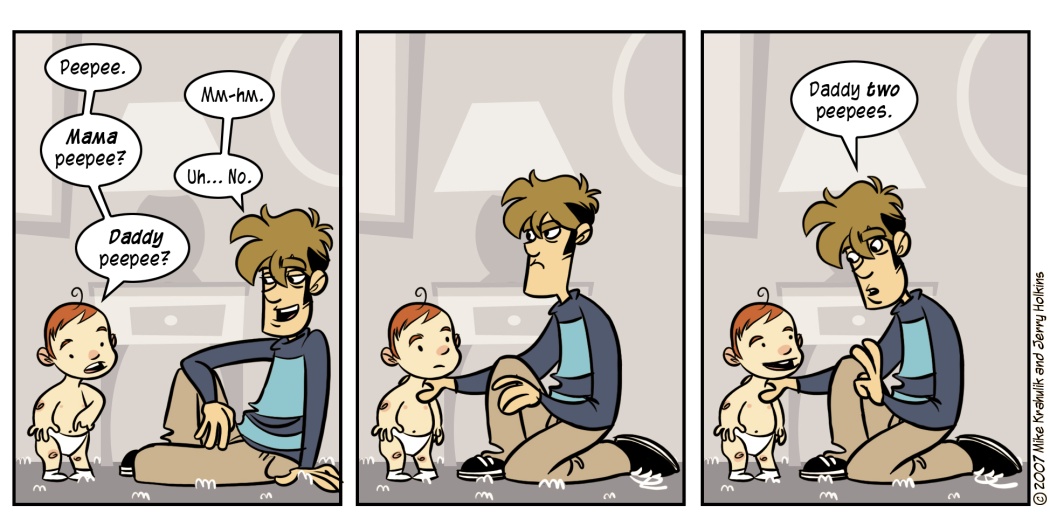 SquawkBox is a free plug-in for Microsoft Flight Simulator. It lets virtual pilots connect to a network where they can communicate with real people performing virtual air traffic control. I first came across it in 2001 while searching for add-ons to the latest version of Flight Simulator. The description I read online made it sound like a big MMO for pilots and air traffic controllers, a concept I could scarcely believe until I logged on and tried it for myself. My inexperience meant that on my first try I flew my small Cessna right into the approach path of a major international airport. The controller who called on the radio and suggested I do a quick 180 before I get smashed by an incoming 747 was ever so nice.

Some of you are probably scratching your head at this description, so let me be explicit. There are a bunch of people in their basements playing Flight Simulator, and a bunch of people in their basements pretending to be air traffic controllers, running an application that simulates a radarscope. All wearing USB headsets, they are connected to a big network called VATSIM where they talk to each other and simulate realistic air traffic procedures as accurately as possible. And some of them are drinking.

Aside from the immediate appeal of having a mini-fridge in your cockpit, adding this type of online experience to flight simulation makes it qualitatively different. Not only do you see other planes out your cockpit window, and talk to air traffic controllers while flying, but you don't even take off without at least a half hour of preparation. Just like in real-life, you have to check the weather, prepare your flight plan, file it with the appropriate authorities and contact a controller to get the proper clearances. All of this happens before you even turn on your plane's engines! Out of the box, Flight Simulator starts you on the end of the runway: you just push the throttle and take off. So while on the surface this may seem like a much more tedious proposition, SquawkBox users take the additional realism quite seriously.

Shortly after trying it all out, I was so hooked that I contacted the author and eventually took over the freeware project. I spent the next three years working on a new version in my spare time, and have worked on updates and patches since then. What started out as a fun side project ended up exposing me to a world where the obsession to create an authentic experience is completely unmatched by anything I had ever seen. LARPers may spend an entire weekend in the forest, but this crowd reads thick FAA manuals for fun.

The depth to which the virtual aviation enthusiast pursues this hobby depends entirely on how far down the rabbit hole they want to go. You could get a headset and fly short flights using your mouse and keyboard (a fact you should probably not tell your fellow pilots lest you be ridiculed for such unrealistic input devices). Or maybe you get a yoke and some pedals and build a little cockpit at your desk. Maybe you decide to make the leap into air traffic control and join one of VATSIM ís controller training regimens, hoping to pass the test and get certified. Perhaps you join a virtual airline flying long-hauls across the ocean, building your hours until you achieve the coveted rank of Captain. Or maybe you spend years searching for surplus Boeing parts to build a 737 cockpit in your garage, or elsewhere if the hydraulic motion platform requires a larger venue.

Safe, efficient air travel relies on a mountain of rules, procedures, international treaties and regulatory schemes. On VATSIM, they try to simulate them all. It may just look like a bunch of people flying and directing air traffic. But to make sure the whole operation runs smoothly, there are a ton of regulations, organizational hierarchy, committees, agreements and other schemes which effectively add up to a government bureaucracy sim. Maybe this sounds stale, but if you're trying to be authentic you may as well go all the way.

The amazing thing about VATSIM is that it works at all, since it is a completely non-commercial operation. From administration of the servers, to writing the software, to running the various virtual air traffic control authorities around the world, the entire thing is operated by volunteer effort. I think the secret to its success lies in both the dedication and friendliness of the participants. The community consists of people from all ages and walks of life, brought together by a shared passion for aviation. Overall, they're a really friendly bunch, making it easy for a complete noob to get started. In other words, it has all the ingredients for a successful online community.