Both our holiday visits had a number of moments like this one. 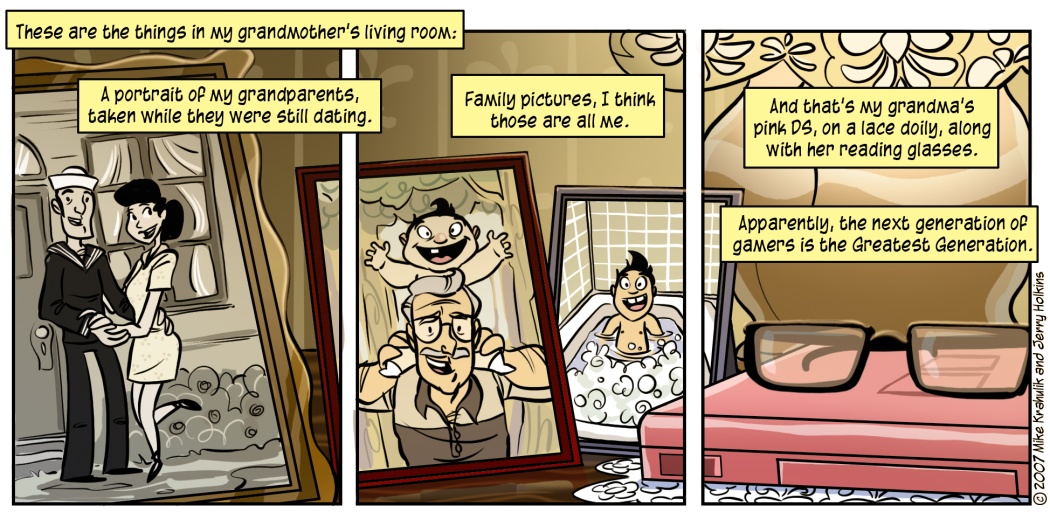 It's at least partially a story about how Nintendo dominates the entire universe, but that's not the core of it. Our parents and grandparents are playing videogames. A lot. My mom probably plays something like four hours a night. The "Brain Games" thing never got its hooks into me, but as a type of play that is a "Mental Exercise Regimen" it provides an in for people who won't allow themselves to enjoy leisure for leisure's (delicious) sake.

People play games (videogames included) for a number of reasons, and those motivations make different types of games more appealing than others. We're not measuring laser-cut slabs of aluminum here, with precise angles and volumes. We're talking about a context in which the weight of each element depends on the person viewing it. I will often read a review of a game I have played and cry aloud at its content, as though they were making false claims about demonstrable, physical phenomena. It's like I am gesturing with my whole body at what is obviously a pumpkin, and being told that the object on the table is, in fact, an opossum. They aren't liars, or villains. They are gamers. They simply have a different sort of metabolism, one that craves peculiar, to my mind heretical fare.

A good example of this playing out is in the guitars for Guitar Hero and Rock Band. When the Rock Band guitar is working, I vastly prefer it: its size and shape are much closer to electric guitars I have played, and the strum bar is thick at the outer edge to be gripped like a pick. Its operation is largely silent, without the characteristic click of a microswitch, designed (I am sure) explicitly to be quiet. Some people love that click, though - it means precision - and for the player who craves that fifth star, there is no higher virtue. Stars in single player are, for me, irrelevant. I'm sure this makes me a scoundrel. I only care about stars in co-operative multiplayer, where I see them as an index of our indomitable band spirit. I want a measurement of our unity. I'm playing the same game for an entirely different purpose. I wouldn't notice if it did click. When the song begins, I enter a trance.

That's a pretty serious distinction - people who play games in order to excel at them, and those who play games as a conduit to fantasy - and its only one axis of the diagram.