The frustrating thing about Gabriel is... Alright, let me start over. 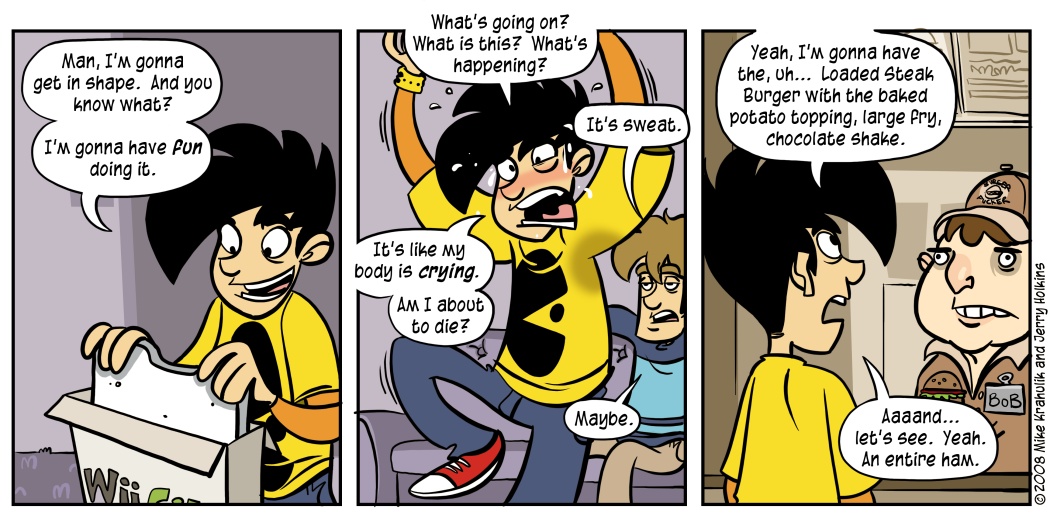 One of the many, many frustrating things about Gabriel is that any excess calories he consumes are converted directly into scorn. They do not linger, they do not collect, he is never physically altered by them. I've known him for fourteen years, and other than a relatively recent goatee - which could indicate a dimensional doppelganger scenario - he is absolutely unchanged from the moment I met him. His exercise regimen usually consists of yelling at his monitor, but I think he may have his eye on something a little more codified.

Kiko came back from Burger King yesterday haunted, and exhausted, as though he had disturbed something terrible in a mausoleum and then run all the way home. The spectre in question was this hideous thing, referred to in the strip to obliterate Gabriel's fitness gains but also as a kind of epitaph for my nation. I wanted to mark the point where things became irretrievably broken.

All the Nintendo coverage made a Nintendo comic inevitable. If you're curious specifically about their pronounced casual play, though, Vinnk over at 4 Color Rebellion tracked his Wii Fit usage over a period of two months - as much actual data as you're likely to find anywhere. Here's the landing page he made for the endeavor, along with his final conclusion, soul-searching, and personal analysis. It was a whole mirror neuron thing - reading it made me feel rejuvenated, as though I had performed the regimen myself.

Has it not been invigorating to watch the press roll in for these WiiWare titles? It warms my heart to see an indie powerhouse like 2DBoy's World of Goo writ large, and I think we held our breaths for the duration of the Lost Winds trailer. SquareEnix is in. Crucially, Videlectrix is in.

Suddenly, a grim dirge is heard - and when the curtain is drawn, the man at the organ is revealed to be Chris Kohler. A dirty shovel leans against the instrument, and his mud-encrusted galoshes slip and stomp on the pedals. Where has he been? What has he done? We may never know, not really: but he attended the same Nintendo press event as everyone else, and it left him with a few questions. Like him, I've been surprised that there's no official discussion about content size. They don't really have a choice: it has to be very, very small. If PSN's limit is unlimited and people consider XBLA's limit draconian, then given the storage situation WiiWare's must be fascist by comparison.

I understand why there's no room for it at the press conference: it's tough to segue from their fitness initiative and paeans to the mass audience to talking about kilobytes. Kilobytes are how we store things, though. They'll need a clean answer to this soon, one that makes sense to the civilian population.

he preferred cats to people
Advertisement
???