Comic conventions often have a "free shit" table, and our booth was situated in such a way as to watch this locust swarm coalesce. We even had a chance to see this drama unfold, which we immediately transcribed to the surface of the table for future use. 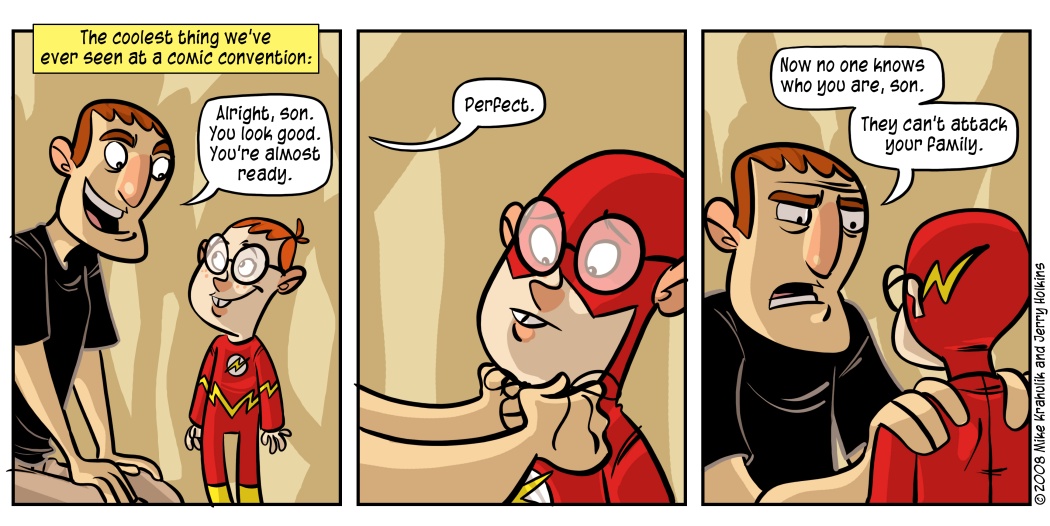 We started the event with our psychic reserves depleted, as we'd been up until two o'clock in the morning the night before. If a grown man is coming home at two in the a.m., it would ordinarily be fair to assume that he was drunk. I would give you that one for free. However, since this time was spent with Gabriel - who won't even drink Jamba Juice for fear of its stimulating qualities - we seriously just played cards for five fucking hours: specifically, the Magtheridon's Lair Raid Deck. The short version is that my reputation as a motherfucker was retained. The long version, which I won't actually make you read in its entirety, was that this deck recalled for me something I'd read on game-ism: the site's nebulous author talked about a GDC class where they learned to prototype any type of game with cards. Mechanically, WoW (Card Edition) is spookily similar to WoW (Videogame Edition) - the essential meaning of the system is retained, but expressed in a kind of collapsed, Reader's Digest, sort of "Large Type" edition.

I've never done the actual Raid this deck is based on, but the deck's theme - that of an enraged demon - is so crisply modeled that it almost doesn't feel good to play it. It's inherently brutal, unfair, and frankly mean-spirited. Players who contend with such a creature may derive some satisfaction in his obliteration, but as the game's nominal "Dungeon Master" I just felt like an asshole - and searing players is kind of my thing.

We were interviewed recently by Major Nelson for the game, and when he asked what we were playing, Boom Blox came up quickly. I suggest that it plays well for a tech demo, which I meant as a joke, but it is ridiculous how much entertainment there is to be had - even in two-thousand and eight - by plucking and blasting these Goddamned rectangles. It seriously looks like something that you would install with your 3dfx card to verify proper installation. Without the remote, that's probably where it would stop.

It broke us of Grand Theft Auto, for Christ's sake. What is the differential on developments costs, there - a hundred to one? And yet there we were - Gabe, Scott, and myself - staring at a heap of bricks. Robert, who can probably calculate the game's physics entirely in his head, couldn't stay away even though he likes us to think he is immune to joy. He probably wasn't aware that his mouth hung open the entire time he was playing, the working of his mind visible beneath his temples. It's the antithesis of Liberty City, and it's startling that both of these things can exist in the same dimension.