Penny Arcade prides itself on delivering a more robust assessment of the ninja lifestyle than our contemporaries, who are content merely to focus on how awesome they are. No-one wants to discuss the aftermath, once the corrupt warlord had been put down. They don't want to think about the hand that holds the certain blade, or the mind that mixes paralytic toxins from grey lichen on a high crag. Their community faces serious challenges and I think it's time they were taken seriously. 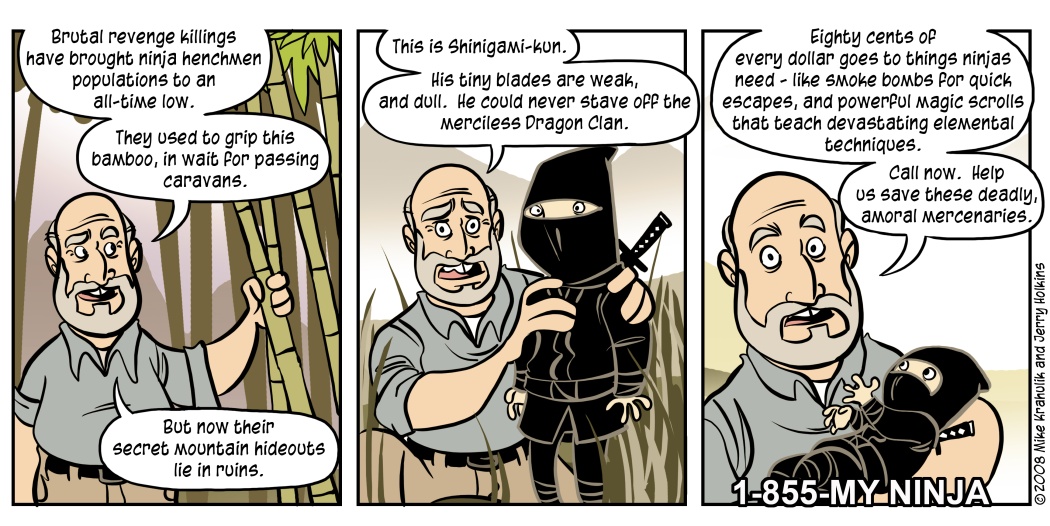 Plus, Ninja Gaiden II is out, and we wanted to make a comic about ninjas. That's what brings this whole shit full circle. It's a wizened martial master holding a baby ninja off Pride Rock while Elton John sings in Japanese.  A meerkat and a warthog look on.

On a weekly basis, we've got apocalyptic news about the PC as a platform interleaved with assertions of a phoenix-like resurgence. The phoenix-like resurgence portion is rarely built on any stable metrics, so it's impossible to know the vigor of this reconstituted sovereign with any precision. The important takeaway point is that everything is incredible, perpetually so, even while publishers, developers, and many of your own (supposed) friends choose to grip gamepads during their increasingly constrained leisure hours.

I don't think you can have any perspective on this industry unless you've spent time with PCs. You need to know that when Insomniac is talking about how they're going to have sixty players, and squads, and so forth, that Battlefield 2 had sixty four players, and squads, and maps for specific playercounts in two-thousand five. In 1999, I played a game of Tribes with a hundred and twenty-eight players over a modem. I've got nothing bad to say about Insomniac. We have a friend who we have seen travel through the industry one developer at a time, and when he finally landed there I breathed a sigh of relief because I didn't have to worry about him anymore. He'd finally made it. What I'm talking about is perspective. If you want to look into a Goddamned crystal ball, spend some time with a tooled-up personal computer.

Mass Effect is, quite frankly, a shadow of itself on the 360 - supposedly the title's "lead SKU." The very existence of the PC version is owed to consoles, but this is a "port" you can feel pretty fucking smug about.

It's the best, period. And you pay for it. Age of Conan and Mass Effect both have massive review caveats about needing substantial horsepower, but let's be serious: you always need more machine. Every review could include such language - it's always better to have more. No argument enrages the PC stalwart like those relating to the cost of their preferred platform.  This is a real concern, and the cost is twofold, but if you bring it up they start to bang trash can lids together. Upon the release of Crysis, it was not uncommon to find these progressively insular sects claiming you could build an entire computer for five hundred dollars that would run the game at top speed. It wasn't true, of course. It was like some magic feather they could hold.

As an adult of stable (if bizarre) employment, though, I have money to spend on things that I enjoy. What I don't have any of is time to resolve ultra-rare DVI incompatibilities with SLI setups where the motherboard is an nForce etcetera. I maintain this hardware because I need to know what's coming - because I want access to a global community of independents, auteurs, and freaks who are this medium's genetic future. I'll never be able to divest myself of the intense nostalgia I have for this platform. I can't be without it. But if a person wants to play videogames in their spare time and not perform mechanical surgery on their equipment, that doesn't make them an idiot. It makes them a pragmatist.

her shape in the doorway