For my cohort, there was never really a choice in the matter: each version  of Soul Calibur had exclusive Star Wars content, which made owning it a necessity. The comic strip is only about the "choice" for a moment, though - a single line - and then it is about something else altogether. 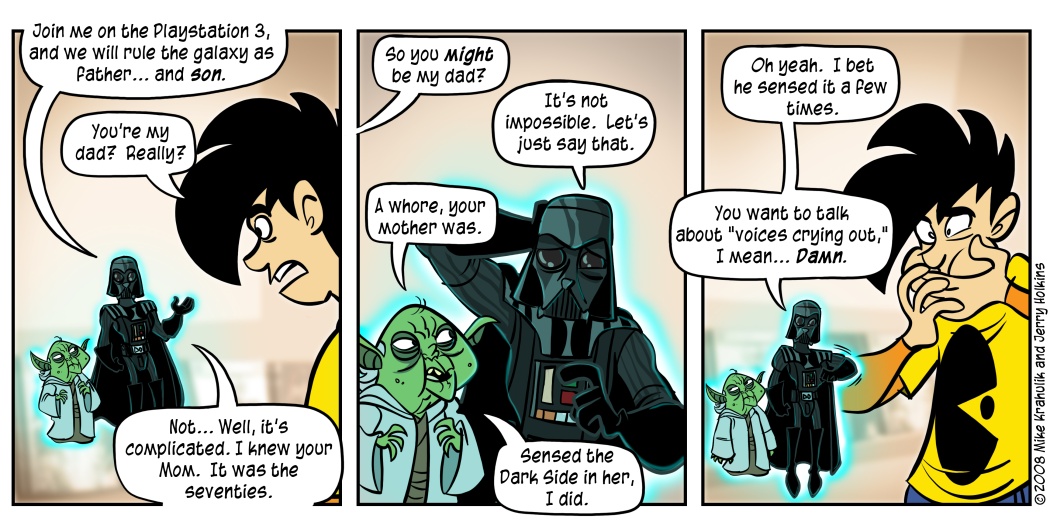 The rumor is that Yoda and Lord Vader will be coming to both systems via platform specific DLC, which has been decried in some corners, but that's in line with the run of the mill ahistorical bullshit one must endure on every forum, everywhere. The last time there were platform exclusive characters in SC - three of them, balkanized over fully three iterations of hardware - there was no recourse other than to buy three Goddamned games. I'm having a hard time understanding why this is worse.

The longer I am home from San Diego Comic Con, the more I remember of it. Some of it may be of interest to you. For example, on Saturday, I saw a man stop time.

I don't know how I am going to collate that evening, how I can pose the events so that they retain their monumental shape. I never think about the keyboard when I am writing, but when I try to contain Saturday with this thing it seems so small. It feels like the child's version of a keyboard. The scale of it is ridiculous, and nothing inside of it is connected to anything else.

I returned to the Westgate Bar, a place I have tried to describe before, where a woman was playing Those Were The Days. She was playing it on the piano, but in my memory the woman and the piano constitute one entity.  To give you an idea of this song's character, let me include a verse here.

Those were the days, my friend
We thought they'd never end
We'd sing and dance forever and a day
We'd live the life we'd choose
We'd fight and never lose
For we were young and sure to have our way

When I said that I had returned to the bar, let me be absolutely clear: I was returning from the restroom. This tune, at that moment, seemed to give the act a kind of epic cast.

A man near the door threw his arm wide at the crescendo, granting me entrance with a grand sweep. It was Lieutenant Commander Riker. Sitting to his immediate right sat Avery Brooks, who played Captain Sisko, nodding me in. After this, linear time was completely obliterated.

My consciousness bobbed like a bottle in black water, so that the rest of the evening exists only as discrete moments. In the first memory, Jonathan Frakes is singing a duet with the woman behind the piano. In the next coherent droplet, I am in another part of the room. Avery Brooks is now behind the piano, finding chords in it that I have never heard, and when he asks what he should sing next the woman pauses, and then says "Summertime."

I thought, "Oh shit," but I must have thought it with my mouth, because I said it aloud.  He doesn't need the whole song, though. He only needs one line of it:

There is nothing can harm you.

He takes this line and turns it into a kind of meditation.  Trying to absorb every band of data this man is putting out is sheer agony. My mouth just hangs open, all parched basset, and I cover the hole with my palm to hide my uvula. He is cracking open the universe, he is destroying me.  I don't know how you can hear music like this and live.