Soul Calibur is back in a big way, and as much as we like the local options, they do carry with them certain risks. This is why the online mode is such a boon - it allows us to play Soul Calibur together, minus the asphyxiation that was once core to the experience. There are those who still cleave to the old ways, but as long as my own windpipe remains unobstructed I'm prepared to call it progress. 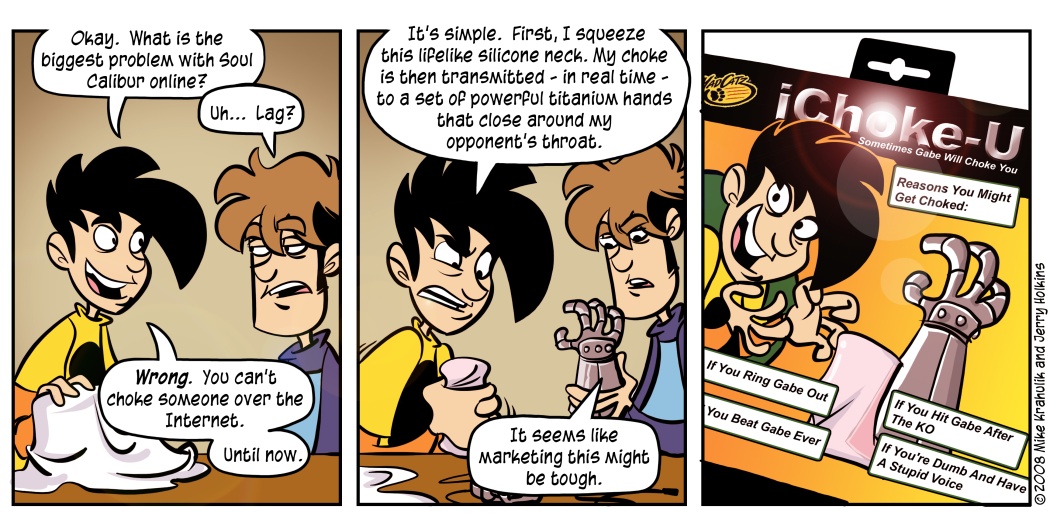 The online is smoother than expected, and that's on both next-gen platforms, but you're still playing a game that comes down to what you do inside very small fractions of a moment. In local play, Guard Impacts - tactical deflections of strikes - are a huge portion of the strategy. That kind of timing is very difficult to pull off in an online match, though it is somewhat easier against larger, slower opponents. The experience is still great, and very difficult to stop playing, though these realities do shift the emphasis.

Between E3 and San Diego, my appetite for games I actually own has soured. I now exclusively want to play games that won't be out for months, which transformed my customary gaming hours into ravenous treks for sustenance. It may be that you suffer as I do. Come, let me share my pack.

I have a complex relationship with PixelJunk games. They tend to be very polished versions of traditional mechanics that I either don't care about or have already become exhausted by. They're "fine." I tend to like them, but either don't purchase them or regret having done so.  I have a soft spot for the mechanic they've focused their new game Eden on - specifically, "grip and swing." It's some primate thing. I think I'm the only one who loved DK: King of Swing, but I was also partial to Wik, thought Tribes: Vengeance had a hell of a grapple, and when I heard that the swing mechanics in Bionic Commando: Rearmed were almost punitive in their difficulty, biochemical fireworks began to burst in my spinal column. Eden is a game about jumping on fronds while in the grip of plant alkaloids. Just so everyone is clear, this constitutes a strong endorsement.

I don't really keep up with things like Whirled or Metaplace very closely, sites which are essentially web-based "platforms" for game development. Game-Life had a link up to a Whirled effort called Corpse Craft which is fucking banging, and may even bang off the hook. If you would like to play a game that feels like the mutant, bastard child of Blizzard, Popcap, and Edward Gorey, you need to get your ass over there. You might try Brawler World, as well - webcomic enthusiasts will certainly note the distinctive art.

The new Geometry Wars is something I've only begun to dig into, but it's juggled around some of its assertions for the better. There's multiplayer, but it's not online multiplayer, which makes it a challenge - I'd love to try out some of these new modes. The first two (of six, total) are where I've spent the largest share of my time. I've unlocked other ones in a pre-release version, but these first two still contain most of my enjoyment. "King" is complicated to explain, but not to play. The basic idea is that you are moving between (very) temporary safe zones. Since you can only fire while actually inside one, your travel between them is exceedingly dangerous - and you only get one life. Since you earn most of your score by grabbing geoms from destroyed enemies, the choice to grab them or return to safety is exhilarating every time. "Deadline" recreates the feeling that Pac-Man Championship Edition did: it gives you a very limited amount of time (in this case, three minutes) to perform in as optimal a fashion as possible. The way this plays out in the real world is that I spend more time playing these three minute rounds than I ever would have clocked in the ordinary mode. I learn more, more often, and we all know what that means.

It does something else that is really smart.  In the menu where you choose the gametype, each entry has its own arcade-style "hi-score" portion that only lists you and your friends. I really don't go in for this kind of thing usually, especially if I have to go digging around for it, but showing where I fit in the hierarchy automatically lends my friends list heft and presence.

i can see them cut the counterweight