Publisher reception of our Bogey Golf informational packets has been uneven.  We've scanned the letter we recieved from Golf Digest, probably the most reasonable of the responses, though they did put the word "comics" in quotation marks. One established periodical is seeking legal recourse, holding our submissions as evidence. We briefly began work on Golgolfa, a fantasy adventure comic, then switched to Fairway Nights, a procedural that features a young Jack Nicklaus solving crimes for an organization called The Clubhouse. Robert has suggested that until some of the legal challenges are resolved, it might be best to batten down the golf content for awhile. 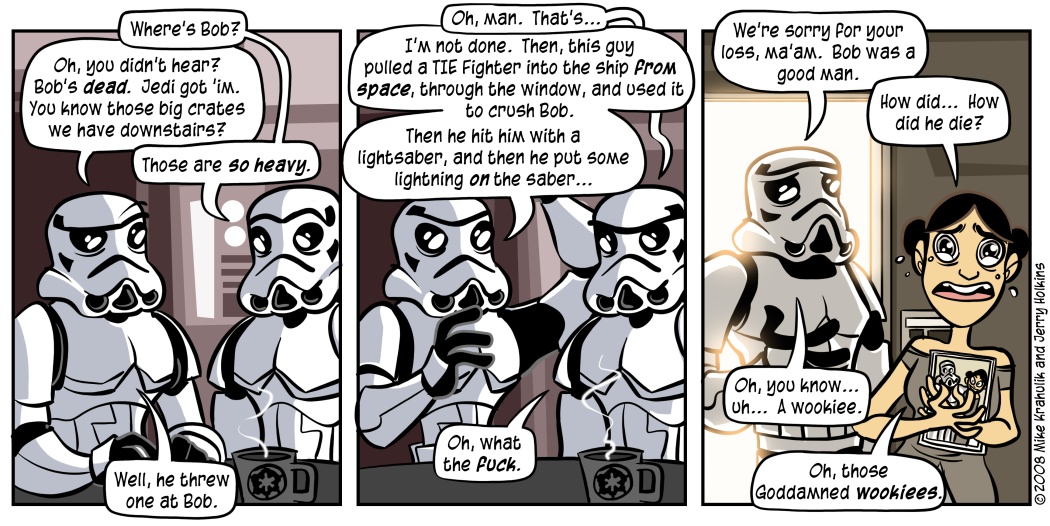 Here is a comic about The Force Unleashed, which is a videogame, and not golf. The demo should be up late tonight, so late that it is technically morning. I nearly drowned in Joystiq's feature on the upcoming art book, which not only shows the path they took to get here but also explains (from a lore perspective) why the game's representation of the Force is such a radical departure.

Most Team Fortress news is focused on the Heavy update, Sandvitches and so forth, but for us the new bit on the main blog from Dhabih Eng dealt critical damage. Gabe (not Newell) used to follow his work on an art board he used to frequent back in nineteen ninety-nine, presumably on a monitor of hewn stone into which a glowing spirit had been bound. When we learned years ago that Valve was staffing people like him, we felt there was at least some evidence of a moral universe.

We can look at those images, and be awed by them, but he probably doesn't even like those pictures anymore. Artists are this way. Team Fortress 2 itself was considered visionary when it was released, but they've been marching through their own game for months now, scouring out old assumptions and stacking new interactions atop one another. This is the perfectly natural arc of the creative process, but you almost never see it here. This is probably something like software development's natural state, but very few developers can afford to be governed by their better angels.

everybody knows you are a liar