At the end of PAX, before the mics were dropped and we were thanking every entity that came to mind, I lost the use of language. I had maintained, which is to say I had kept my shit together, up until that point. I had projected the image of a congenial host at a very high resolution. But when it came time to close the deal, I couldn't actually do it. I have entertained many scenarios in an attempt to contextualize my failure in this, and the one I have chosen to believe is relatively straightforward: I didn't want it to end. My heart whirled and phased like some new form of matter. I wanted to retain that moment, if not forever than just for longer, a moment which cut like a bright violin over the rude din of the material universe. 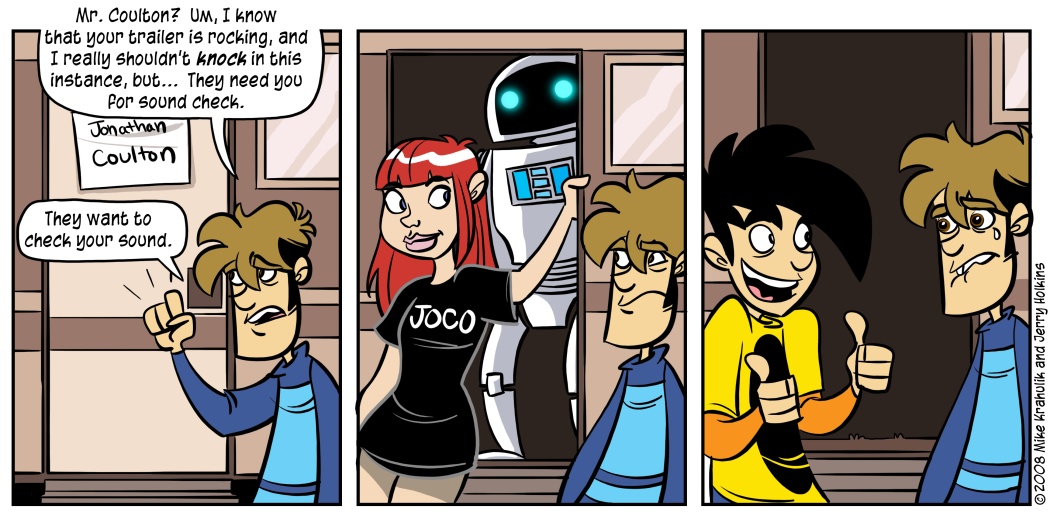 I wasn't able to glean everything from our own Exhibition Room, a testament either to its vasty depths or my own schedule, but it was often packed to the gills. I have a couple different answers I give when someone asks me what PAX is about, and they are both true, but one of them is the idea that we are attempting to create a corporeal Internet. We have done it on purpose, but even I am surprised when that ethereal geography begins to materialize. When you actually see someone like Paul Barnett (who is "that crazy British person in those Warhammer Online videos", among other things) it's just... startling. I saw Kim Swift, one of the people behind Portal, someone I'd seen so many times in interviews that for some reason I felt like I knew her. Ten or so seconds into the conversation, I realized this wasn't actually true. Very embarrassing.

I also saw Felicia Day at the show, who gave me a brush and told me to groom her. This is a thing that really happened, and it was bizarre, but not so bizarre that I wouldn't do it. It was like brushing a unicorn.

The trip to PAX destroyed Gabe's computer, and it will not dispense the strip that we created at the panel on Saturday, which is too bad and I apologize. This is one of these intractable "physical reality" problems that our people are constantly being made to endure. I'm heading over to the convention center to do teardown now, so I won't be able to fix it until tomorrow. It's about Jonathan Coulton! Sort of...?

PAX has developed a culture independent of Penny Arcade, which really makes me wish I had called it something other than PAX, but Robert only gave me five seconds to come up with it. All we have done is provide the barest sort of excuse, and in moments a coherent nation forms. What this tells us that it was always present. It simply needed a vessel, a thing we have done our best to provide.