The friendly way to present the Seinfeld Vista ads is that they "get people talking." This is an adjunct to the notion that there is "no bad press," a lie we are happy to expose on a regular basis. Admittedly, I'm obsessed with advertising as a means of communication. I think it's possible to communicate virtue in a way that is ethical, interesting, and genuine. 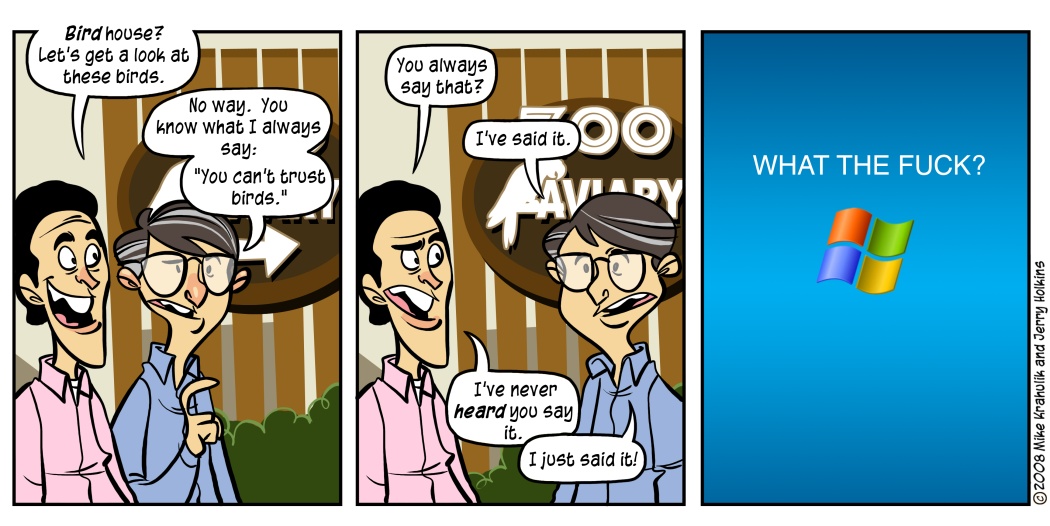 I am sometimes accused of idealism.

These spots communicate nothing. It would be difficult for me to express how angry stunted communication makes me.

If we are to observe the problem in its totality, I recognize that trying to make Vista seem like anything more than a modern Judas Cradle is a tremendous challenge. This is part of why I am, in general, impressed with what they've managed to accomplish with the 360. Trying to associate Microsoft with "fun" is like trying to associate Satan with aromatherapy. When we first started making comics about their gaming platform, Electronic Arts refused to deliver online play for it, but at least they were delivering games - not a universal position. Eventually the machine morphed into a kind of Dreamcast successor, with all the triumph and tragedy that aegis represents. The second box has had a less tragic arc, certainly in terms of library, and some of the maneuvers (even when they aren't especially well received by our people) display a celerity that is shocking relative to the company's size. I really wonder where they'd be at if their box was not closely associated with the burning eye of Sauron.

I was looking over the patch notes for World of Warcraft 3.0.2 on the public test realm - the ones that aren't even complete yet - and they're fucking ridiculous. When they said you'd need to spend a billion dollars to beat these guys, I assumed it was like raising your hackles, or thrashing your venomous tail - a predator's warning on entering its territory. Maybe its closer to an actual fact.

The alterations here are vast, but this is only the most recent reinvention. The World of Warcraft people are playing now isn't the one they launched, the one that was so unstable we had to withdraw our earlier praise. It isn't any of the innumerable alterations they've made to classes, or raids, or any of the savvy swipes they've made from user modifications. The game is a completely living document. How do you design against it?  And even if you wanted to play something else, who would you play it with? Everyone you know is raiding tonight.

through the fields of our despair