Today's comic is a chuck wagon of unpleasant realities. 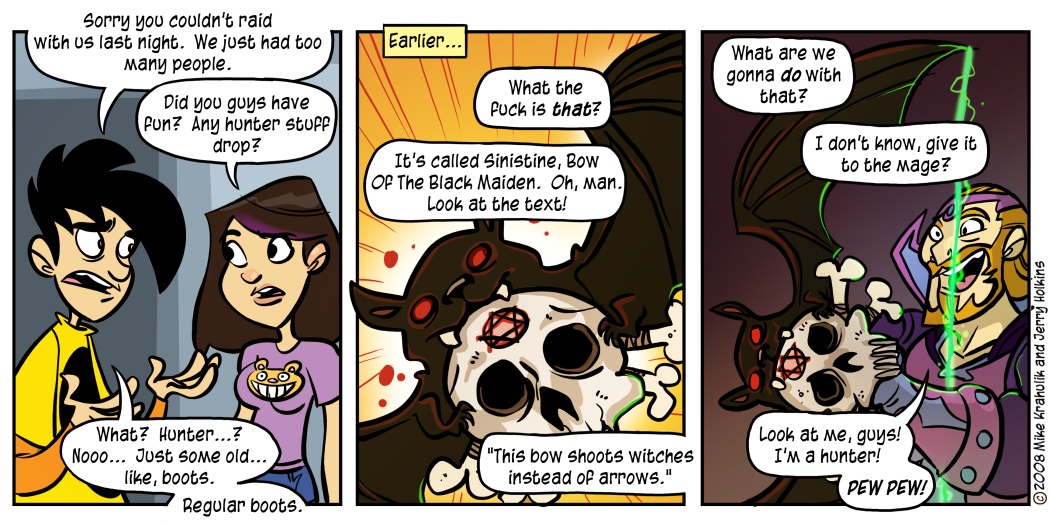 We constructed a guild specifically to play World of Warcraft in a reasonable way, with a focus on five-man instances and a schedule that was compatible with human lives. The trouble is that the rewards for doing the more elaborate raids are almost nonsensical by comparison, ridiculous. I'm not talking about bosses, or middle management, or whoever is being gutted tonight. Even their undead pool man, a Goddamned civilian, drops a ancient, spiked crown that peers deep the future.

So, you build your organization out to grasp that fruit. For a time, you aren't jiggered for five mans, because now you have eight. And once the tens have arrive, you have thirteen. It's some magical Goddamned ratio, written into existence, that ensures human suffering.

Fuck the rest of this shit. I want our next President to have managed a guild.

Robert has been pushing Man Factory's Street Fight! Round One on me for a long time, and I resisted it because the pitch was too strong. When we were coming back from Canada last time, and I couldn't escape the car without serious injury, he put it on. I said it was great, and what was this, but this only enraged him because he'd told me about it months ago. In any case, it's a must. A kind of Street Fighter musical that only improves as you get further into it.

While at PAX, I was approached by a young man who asked me if I had heard of The Protomen. The Protomen. The outfit that creates rock operas based on Mega Man.  I told him that I had.  When you come across something like that, it tends to stay with a person.

They've just released a demo off of their upcoming album, a song called "Breaking Out," and it's so incredibly high concept that it should collapse: Mega Man as viewed through the lens of Rock Americana? How could they possibly have succeeded in this? And, having succeeded, what task could possibly thwart them?

everyone is seeing through everyone