Reading about economic woes at Electronic Arts just as they're starting to do right is incredibly disheartening. 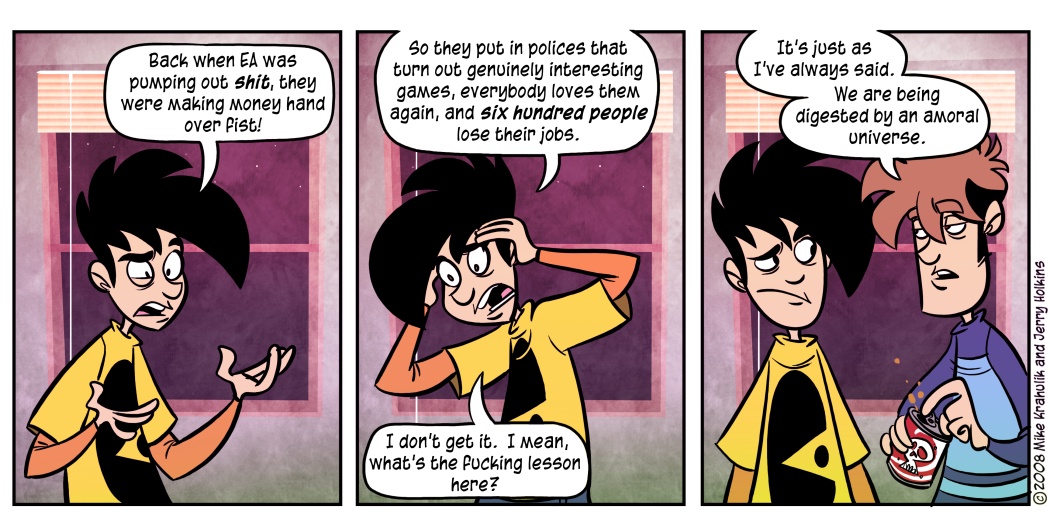 I've been busy. But it's all been interesting:

- So, it turns out that the ultimate music game experience is to play Rock Band using the drums from Guitar Hero. Guitar Hero as a game has some cool ideas - the "open" note on bass is my favorite addition - but in general terms, the polish of the experience can't compare with that of its competitor. Likewise, the base kit in Rock Band Two is simply incremental in comparison to the GH foray. I haven't had a chance to try the Mad Catz cymbal kit, I'll be watching for an update on them over at MTV's Multiplayer, but even the lower portion of the Guitar Hero product strikes me as superior. The heads are virtually the same size, but their generous spacing is better for me as a player. I seem to find my way around this hardware a lot better - it's a less abstract, more visceral piece of equipment. I haven't had any of the trouble with it that others have - at no point have I had to mail Activision for a special cable to reprogram my Goddamned toy.

- I've been screwing around with the "New Xbox Experience" since the weekend, and it seems we'll have little to fear from it. I think that most people will come to think of the old user interface as a kind of purgatory, a place of suffering which the fervent prayers of the virtuous have released them from. It's fast, it's slick, and if you don't like it, you don't really have to spend much time there. The new Guide has been bolstered significantly, and most things you'll want to do are available from it.

The Avatars themselves exist in a place directly between Home's photorealism and the kind of playmobilia represented by Nintendo's Mii. The Mii comparisons are more firm, but this is largely because the facial features are incredibly similar. If you go with line mouths and TinTin dot pupils, the comparisons don't leap as readily. In the inevitable future updates, I hope they commit to developing a unique voice.

PlayOn has delivered on their promise to bring Netflix support to consoles, but the gloss and sheen on the NXE's native implementation is considerable. You are, of course, limited to the selections Netflix has available for streaming - what it calls an Instant Queue - but I have very specific appetites. I only watch television and documentaries, both of which are in ridiculously deep supply.

Speed gains from from "installing" your games - ripping them, really - are incremental. I had the highest hopes for Unreal 3 titles, which are universally bedeviled by texture pop, but there were no perceptible gains. The advantages are quieter operation and reduced strain on the hardware, which given the platform's history is not an insignificant consideration. Less work for the optical drive is preferable. As someone who owned a succession of Playstation 2 systems - five, all told - I'm sensitive to the strain on that toiling, exhausted beam.

- While men were excavating my living room, it necessitated a return to portable entertainments. I typically indulged this with Lock's (fucking awesome) Quest on the now shamefully obsolete DS Lite. I also spent some time beneath the groaning boughs of the iPhone App Store, trying to find a game that was worth a good God Damn. Hipster sheik R Stevens told me that Galcon was a must, and he's quite right.  It's what you might call "Space Risk In Real-Time."  It's a game I already own for the PC, a tender morsel I'd scooped up on some recent indie gaming jag, and I was happy to append a tiny version of the game to my collection.  I was quick to respond back to R with Spin from Secret Exit, who you might remember from that awesome game where you hurt that man on the stairs over and over. Spin is a game where you match up silhouettes. It doesn't seem like matching silhouettes would be awesome, I know. But it is, in fact, totally awesome.

i'm waiting for this test to end