It seems as though the floodgates are beginning to creak open on inFamous, including (among other things) the revelation of "Karma Moments" - a tracked morality system with effects on player progression. It wasn't meant to be funny, but for some reason we found it very funny, because like many mechanisms of this kind your choices tend to come down to being an omnibenevolent supercherub or the Goddamned devil. 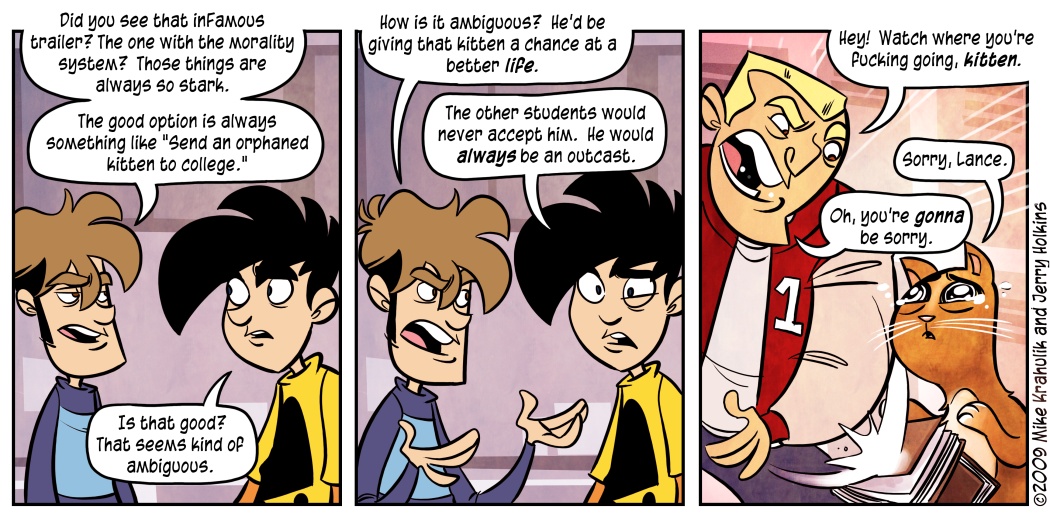 Kiko and I were able to put Resident Evil 5 to bed last night, granting access to The Mercenaries, which is the combat subset of the game with all the meddlesome narrative peeled away - what you might call the Gabriel version. It's a mean, compact thing, with the dense contours of a P90. I hope I have a chance to go deeper on it, before I am distracted by the insistent sparkles of some new thingy.

Robert showed me something called the "demand curve" once, when he was trying (unsuccessfully) to make me less stupid. The arc of these lines explains in a visual way what happens in Resident Evil 5 when you play it in co-op. The line that begins high is Survival Horror, and the other line is Action Adventure. Whenever either partner picks up money in the game, this money is doubled - each player receives the same amount. With money up to your ass and ammunition exuded from every pore, the game transforms into an action title while you are playing it, right before your very eyes. In single player, during our experience at least, it hews much closer to series traditions.

One of the tropes that everyone trots out but can never take the time to fully explain is that the game is less scary because you have someone with you - this just doesn't strike me as a true statement.  I've been playing games in the nominal "horror" genre with friends since the genre's inception, or seen films of a spooky nature while seated in a packed theater, and have found in every case that these themes are deepened by some herd-based fear-amplification mechanism. One of the scariest moments of this generation has to be in Chromehounds, where sending teammates beyond radio range meant that their communication was literally cut off. I had five other people with me, and the fear was not lessened.  They're barking up the wrong tree.

I would say that Resident Evil 5 is less scary because you aren't in danger, and that's not a function of having a partner. Between an arsenal that perpetually escalates in power and enemies that don't, with plentiful mid-mission stores that sell miracle cures and (most damningly) a deep stock of grenade launcher rounds, it's a matter of game balance - or the lack thereof. It doesn't keep the game from being fun, but it's a different sort of fun, and it may not be the fun you want from Resident Evil. To hold back this curve, you would have to treat the money you accrue as a kind of alternate score, hoarding it.  If you want to, anyway.  Everything about this game asserts that it is the coda of the Resident Evil franchise.  Perhaps it ought to go out with guns blazing.

In any case, I think they're hearing the totality of the critical dialogue. Capcom seems to understand internally that they have "done" this kind of game already, and that another reinvention should be forthcoming. For my part, I am interested in and enthusiastic about innovation, but I do not worship it.  As a virtue, I think execution - for example, the kind of execution seen in Resident Evil 5 -  is woefully underrated.