The first two panels are essentially a transcription of the actual conversation. For him it's a kind of "fish story," this supposed fifteen letter word, falling into that distinct category of lies that includes such dubious classics as Canadian Girlfriends or Exploits Behind The Roller Rink. Maybe you didn't have a roller rink where you lived, but we did, and one was often regaled with thoroughly detailed (and occasionally physically impossible) tales of pubescent eros. If all the stories one heard about this venue were true, perpetually writhing teens must have been stacked like cordwood. 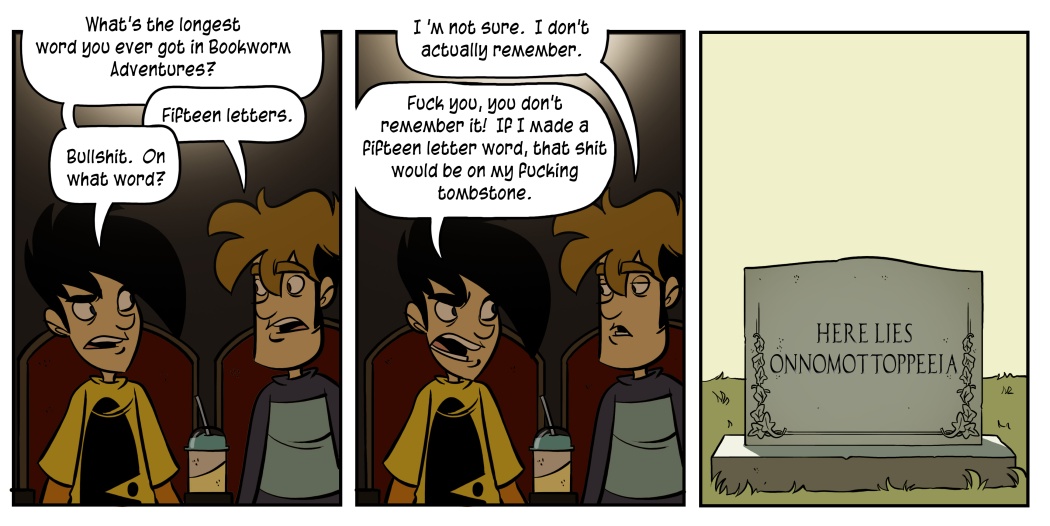 I mostly played Gauntlet during these things, or dragged those girls who relented out on the floor to injure them. I needed them to hold me upright, a fact I typically withheld during the courtship phase.

In any case, I love words and I love to remember them, but I need some kind of context to hang them on. Someone named Evan taught me the word macropterous two years ago, and I've never forgotten him. But words in scramble games aren't even words as my mind understands them, and I have no natural skill with games that involve loose letters. These aren't words as meaning, they're not even whole words in my mind: they're polyamorous molecules dancing in solution. They're game pieces, and when building a word over the course of a level - slowly trimming the set until it yields the desired fruit - its meaning is in constant flux. That's part of what makes a fifteen letter word less of an immaculate conception and more like dragging a plow. By my method, it's almost entirely mundane. Then you dust off some workhorse suffix like -ously, -ation, or -esque, and Bob's your uncle.

That's why I hate Warp Tiles, because they preclude these long scams, which for me is the entire game. I will be recorded in the Great Book as the only person in the history of History to ever ragequit Bookworm Adventures, which I'm aware is a shameful and borderline loathsome indication.