Gabriel suggested we do another Uncharted 2 comic, that is to say two comics, because it is Uncharted two. His argument was unassailable, and I relented. Uncharted's tweetful propensities may be customized to your liking, which was kind of them. It's an asynchronous form of Xbox Live's presence updates, and I'd expect to see much, much more of it. 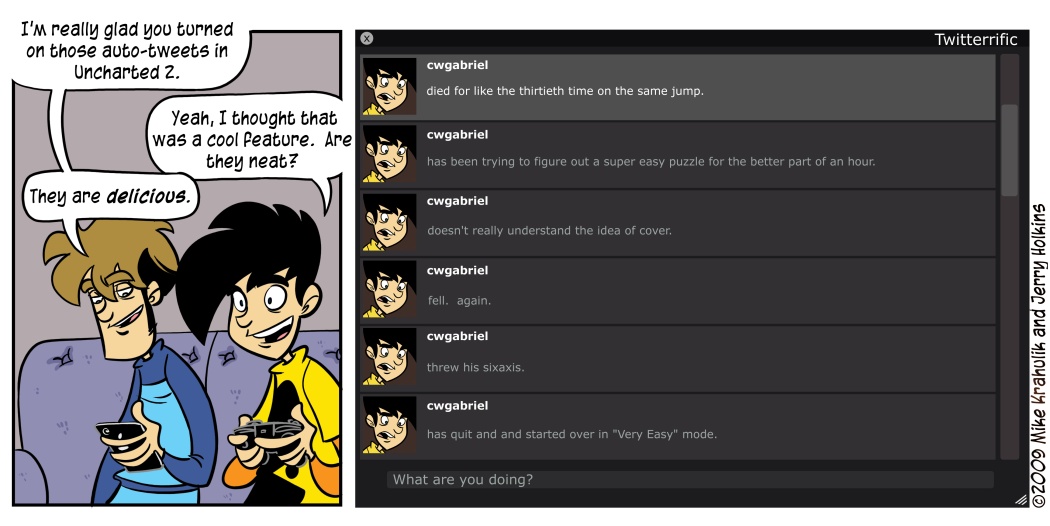 I don't have access to the Xbox Dashboard Update, the one that adds a number of features cribbed from the Wider Internet and sanitized for inclusion in your entertainment appliance. These functions are modular, as opposed to "inherent" - they're not available perpetually, like chat or the friends list - along the line of their Netflix support. This mystifies people, but Netflix is really the model to consider: single function "applications" that people use from their couch, or exist as some ambient accompaniment. If those don't sound like things you would use, and certainly I'm situated in this camp, then consider that we were never meant to.

I think this application model is, in some ways, aspirational. They want the device to be used for these things: an altar of devotion in the heart of the home. Brenna couldn't give a shit about videogames, she is in fact actively opposed to them, but she uses the Xbox 360 on a daily basis to watch television of all things.  They'll never release them, but the usage stats for these functions would be fascinating.

It's already possible to play Last.fm stations on your Xbox, precisely the way people say they want to, but it's boring to explain - suffice to say, there's an app for that. Multiple apps, actually, piled atop one another in a kind of precarious erotica. That's why I'm not going into it. If you want to stream shit, though, and stream things well beyond the stated charter of any dedicated console, you need to get Tversity installed on an available network computer. With the plug-and-play support for networked content built into next-gen systems, they can be fooled into all kinds of ridiculous tricks. There's no reason to wait until the platform holders get around to it.

We were sent a review copy of Borderlands to check out for the VGAs, and after an hour or so of play I went over to my computer and ordered that Borderlands four-pack. I decided then and there that I wasn't going to deal with any "should I buy it" or "I don't know man" bullshit from potential comrades. I'm just going to drop a Steam code in their laps, and then gesture in the direction of the wasteland. I didn't really understand that the PC version was coming out later than the console iterations, even though it said as much on the screen, so now I've got several days to itch and sweat while console players learn what I already know.

I know they're real busy over at Gearbox, but a demo would go a long way.  I suspect that most people won't understand what they've accomplished here, which is to make good on Hellgate's promise in a kind of Weird West milieu. Thief: The Dark Project was sometimes called a "First-Person Looter," though it is even more apt here - God help you when the shakes start, and your awareness narrows to a dark funnel that only slight variations in statistics may penetrate.