I understand that Modern Warfare 2 is a big release - playing last night, the game informed me that my rank was over two million, and that's just on the Xbox. But the granularity of the coverage it's been receiving projects somewhat beyond the threshold of utility. 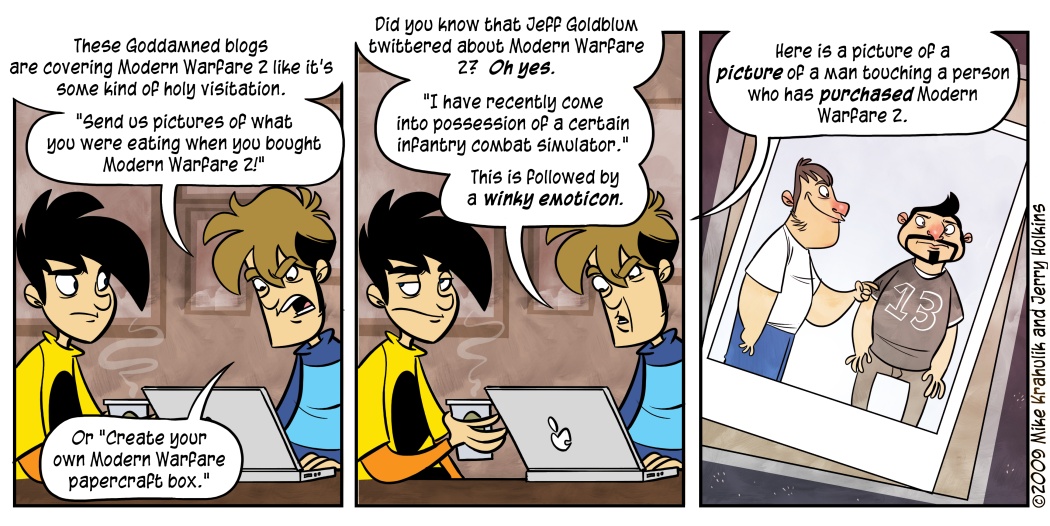 Gabriel never took part in the many, many nights of the original Modern Warfare enjoyed by Kiko and myself, evenings which began as slow adrenal drips and culminated in the howling ecstasy of tribal, entheogen-fueled whirling. He stopped playing the game altogether when he reached the Television Station in the single player campaign, discovered that there were literally unlimited enemies until he crossed some invisible line, and decided he'd had quite enough of that school of design. Watching me sample the new campaign over my shoulder, he didn't find much to enjoy here, either. The absence of cover or blind-fire mechanics is (to him) an Antique Notion, hilariously quaint, particularly when every other entity in this word avails themselves of the environment as a matter of course.

I figured that was about it for my months-long campaign to slot him into our merry band, but he popped on around ten, and we did our best to make him feel at home.  Their decision to dilute support for Party Chat is complex, but they claim it is to keep dead players from spotting in the service of a greater gameplay goal. They way they've managed it here isn't especially savvy, and consequently it leads to some bizarre user interface concerns, where parties can get split up over multiple types of chat. It's nothing you can't manage it, but I suspect that no-one would want to do so while using a piece of software which is ostensibly geared toward entertaining the user.

There are playlists that support Party Chat, identified by a black asterisk, but players who are just beginning to play don't have access to any gametypes that actually support multiple party members. it wasn't a dealbreaker, in that we could mute people (everyone) in either the lobby on the in-game roster, but anytime you take a process that involves zero inputs and substitute fourteen, it's something you should take pretty fucking seriously. Two years ago, Halo 3 allowed you to set a global policy of only chatting to friends, and if Infinity Ward is going to pulverize bedrock platform features in the service of some mostly ambiguous gains, they might do well to emulate that ancient software.

I don't really buy the way it's being used here, as some kind of purity law, but I have to say that I'm glad developers can choose this route. Here, it's just about player chastity. But a game like Chromehounds, for whom the arrival of Party Chat sounded a death knell, is only possible when the game can use chat - not as a something to do with your craw, but as a core facet of the game experience.

i'll never talk to you again