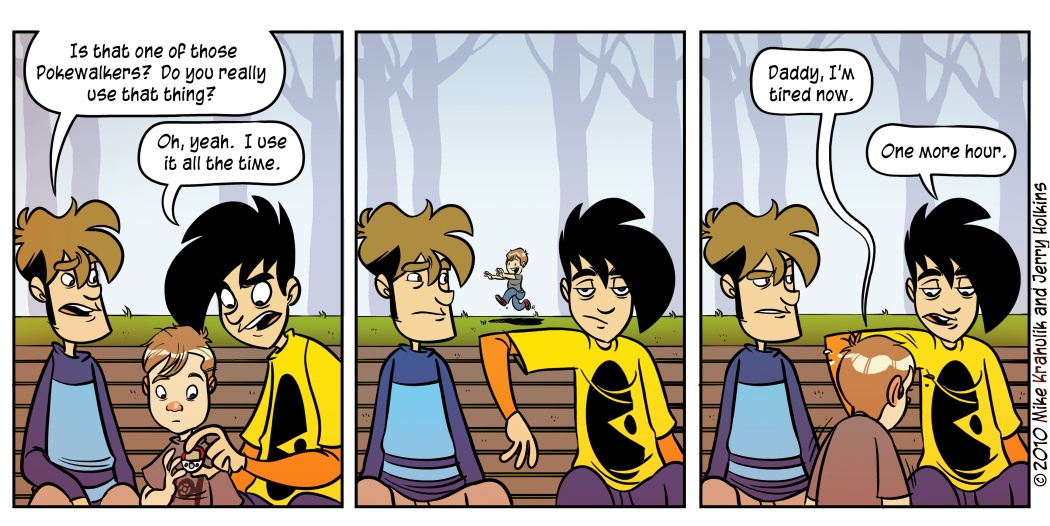 Essentially a pokeball-themed pedometer, your Pokemon reside within - earning experience as you lurch drunkenly about, and encountering the kind of creatures one might see in the latter hours of a spirit journey. As a peripheral, no sale. As a pack-in, it's a manifestation of tactical prowess so stunning that it borders on precognition. Young people benefit on multiple fronts, surely - but parents?  Brother, we get paid for days.

At GDC proper, we weren't there long enough to see much of anything.  It wasn't until I got back and had time to sift the webs that true learning could occur, and Move features prominently in the coverage.  The purpose of Sony's announcement was to establish a beachhead in advance of E3, clearly, but also to enunciate something very specific regarding Natal. The message is thus: we can do their thing, and we would do it, if it didn't suck ass.

That's the takeaway for me at least, as a passive participant in the ongoing dialogue up until now. And the "dialogue" is practically a monologue, because Nintendo hardly gives a shit about this stuff, and for the first time in memory, there aren't a torrent of rumors out of Microsoft to verify every grim utterance of the Internet.

The demo I found most surprising, and I suspect this is true across the widest range of gaming enthusiasts, was this: a video which purports to show full body capture. What it's actually doing is tracking the head and two Move controllers. Is that the same thing? I don't purport to know. It's tracking one person, as compared to Natal's suggested four; it's tracking under stage lighting conditions, as opposed to bathing a target in (purportedly) light-agnostic infrared beams. Again: is that the same thing?  I don't know, and no-one will tell us, and the people in the best position to comment are content to dish up tabloid bullshit of the he-said she-said variety.

Outside of SOCOM 4, to which it seemed well-suited, the demos that really turned heads all seem to require two Move controllers - something the hundred dollar bundle doesn't include.  Again:  is that awesome?  Is that considered a normal scenario?  I feel like I'm only hearing every third word.  This entire dialogue makes me feel crazy.

I own God of War III, and an evening has been gloriously invested therein.  I twisted off a head in the same easy manner one might twist the cap off a box of Tropicana - and in both cases, juices flowed. It is ridiculous in the finest sense of the word, but it had the misfortune of sharing a launch day with Infinite Space - a space RPG where you build spaceships and fight in space.  It is my belief that humanity generally will spend the week devastating the Greek pantheon, pulling the lever toward ever greater destruction, shoveling foes (and the gods they have the misfortune to serve) into the black furnace of the Lamentation Zone.

Society at large will most likely be engaged thus, and I endorse it.  Me, I charged my DSi in anticipation of Infinite Space - not after a bout of play, not a quick insertion of the charge prong after the power light assumes a worrying tone.  I charged it before the game was in my possession, an eager pre-charge, which I hope will be the first of many.

this is not really happening