Oh, I remember what we were talking about, prior to our dark fugue: Laurell K. Hamilton. Okay, yeah. That explains all this, then. You're safe, now; these are the only comics in this theme. 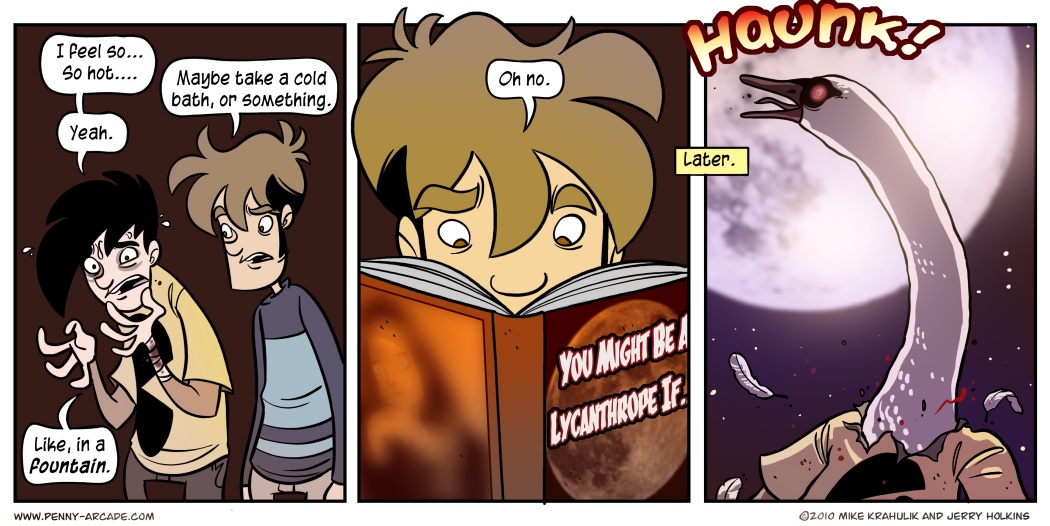 When Cliff Bleszinski says that shooters are the future of RPGs, he's not wrong; late, but not wrong. The original Modern Warfare is as much an RPG as any other game that toils under that yoke. Play it, and tell me it's not: you earn levels and equip items, customizing your character along three distinct trees. In the sequel, even your Goddamned perks level up. I assume I don't need to bring up Borderlands. RPG's are the present of shooters, assuming they aren't the ancient past.

I'm hesitant to guess how many hours we played Phantasy Star Online. Released when dial-up internet was still a thing that people did, you could tell immediately that you were engaged in something which was unmoored from linear time. Deep loot tables, omnipresent robo-pets, and weird crap like language-independent chat wrapped up in a singular look and accompanied by tremendous music.  It was too beautiful.  We didn't deserve it, and yet, there it was.

I can't really discern the difference between a "Multiplayer Action RPG" and a "Horde Mode," except to say that the second one is a less robust version of the first. In such an RPG, "playing against waves of AI Opponents" isn't an aberration, it's Tuesday. Also, every other day. You've played PSO, or you should have: how many times did you enter a discrete hunk of forest, only to have bipedal moles raise their claws skyward in defiance? I never got sick of it, it was always ridiculous, and their hilarious, wholly unfounded optimism never wore thin.  Today, I couldn't tell you what the pertinent stats for a Phantasy Star Online character even are; just that they would dance o'erhead from time to time, swelling with their increase, and that it was enough.

Compare that to almost any other game where "waves" of motherfuckers arrive perpetually, and there is no comparison: in one, an overarching framework conspires to lend every game event greater meaning. In the other, you are shaving away the hours until your own death.  Horde was that strange mutant that survives the rigors of its accurs'd birth, a way to recontextualize the assets already on-platter: in essense, to use the entire buffalo.  Pragmatic.  Now the Goddamned thing is everywhere, shaking the underbrush, a snuffling boar cropping up in every disc I insert.

This mode of play is crying out for definition.  Discipline, even.  I'm tired of waiting for the stupid future; I want to know what's next.