Here is today's strip, or strip shell at any rate, a comic Boboli, which can be filled with marinated chunks of history.

Those are some of the memories we have, a very small subset, indeed, so minuscule as to be a membrane around the actual thoughts, like the very near unbeing of a soap bubble. Do you see what happens when I talk for three solid days, and then start trying to write? It's insufferable, I know. But it's all I got today.

I have many memories, and what follows is a partial list:

- In one of the rooms dedicated to personal computing pursuits, there was a Minecraft server running that was transformed into a multiplayer sculpture park for a contest. tehNakki won, with the following, and just killed it:

Gaze ye upon the raiséd ham! Note the monocle, people! Note it.

- The Lead Person/warpriest/ultron on Warp (Trapdoor's stealthy puzzler) was born the same day as me, in the same year. We were talking bout how we were getting old, and when it came time to compare our relative age and determine who was truly more decrepit, it was a tie.

- I was probably the ten thousandth person to tell Robot Entertainment that Orcs Must Die needed cooperative play, which they were gracious enough to endure, but then I started talking about my multiplayer fantasy where it is a hybridization of competitive and cooperative modes where each side defends their castle but does not fight directly rather they invest the money they get in a kind of tug-of-war with the orcs determining wave strength and special enemies so that the experience is dynamic but etcetera, so on, and so forth. There was no punctuation when I told them, either, and no rejuvenating breaths. It was all croaks by the end, with gestures appended for emphasis. I was supposed to come by after the hall closed and try it myself, but I was so embarrassed by how I had comported myself earlier that I couldn't bring myself to do it.

- I was given a stack of Defiant Map Pack codes by someone from 343 Industries and told to, I am being completely serious, "Make It Rain." There weren't actually that many codes, though. So I had to content myself with "Making it Damp." 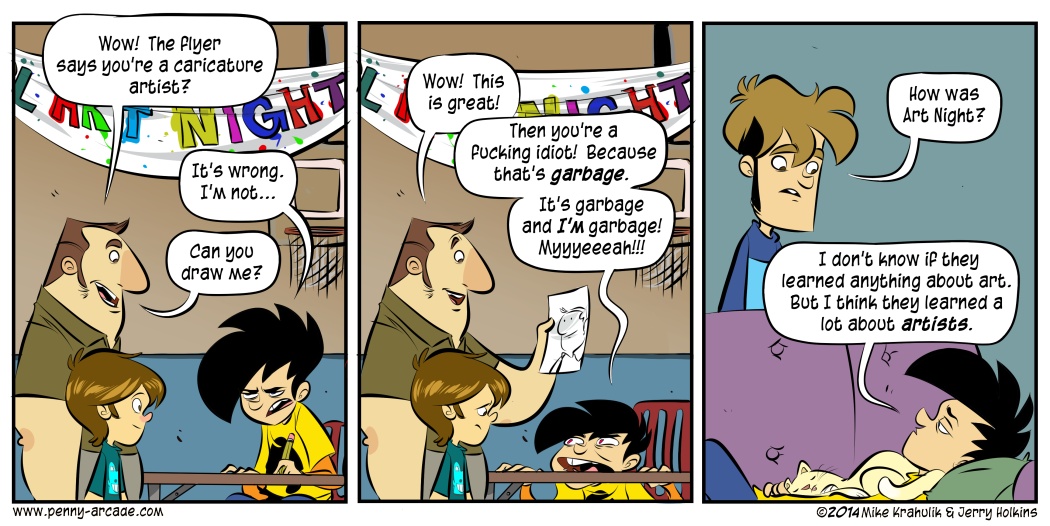 Portrait Of The Artist