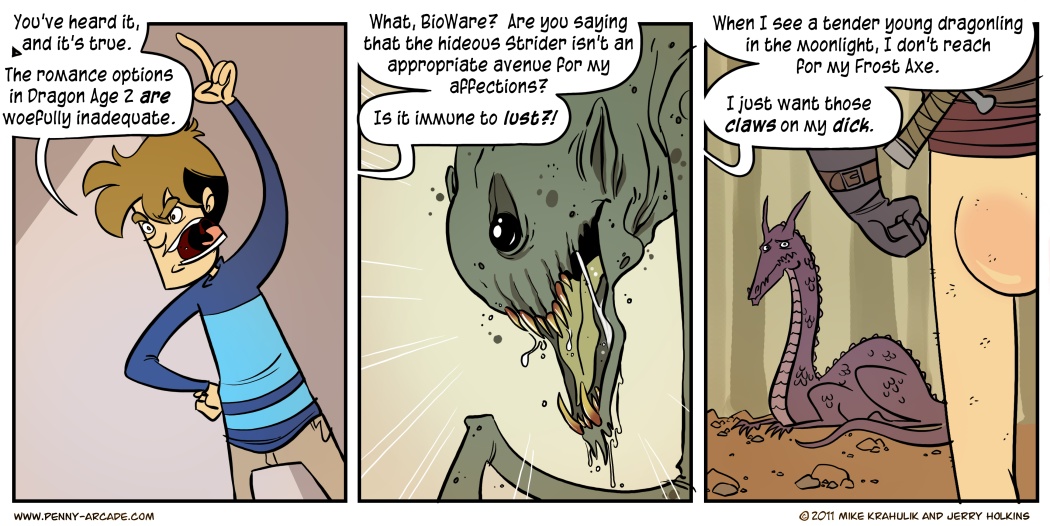 For example, David Gaider is being called on the carpet for not catering to "straight male gamers," but there is also a petition going around to get him sacked for having the temerity to write gay characters who are interested in sex. You really need to read that first link, there - it's incredible. This is why you don't piss off a writer on the Internet. In a medium defined by text, a writer is the closest analog we have to a sorcerer. But there is really no victory for him, is there? He made an imaginary world, but it either doesn't conform with enough specificity to people's baggage, or it conforms too well.

I've made it pretty clear that I tend to play women in Bioware games - Shepherd is not now, nor has ever been, a man. I don't know who the dude traipsing around in the commercials is; a jerk, most likely. That's why I never picked up on either of the above criticisms, because that whole band of data isn't likely to (for lack of a better word) penetrate. I often don't know what to do with these persistent, unwelcome proclamations of affection from others. And having sex with them would involve taking off my armor, and I don't know if you've played Dragon Age 2, but it's a dragon a minute around here. Place is lousy with fucking dragons.

Indeed, Merril kind of wont leave me alone. It makes me uncomfortable, actually, but I like it in a way. It reminds me of when I first saw Samus Aran's face in Metroid: Prime, my face, flashed inside the visor, saw my eyes, which were her eyes, blinking at the brightness. These are truly alien experiences for me, and I'm exposed to them and enriched by them because I didn't have to fill out some questionnaire before playing the game to make it aware of my sacred boundaries. I wasn't given the option to check the "No Homos" box, or to choose an elf with a less bewitching accent. Instead, I was dropped hip-deep into the Inferno Round of a moral quiz show. I just want to shake these people sometimes. Hey. That feeling, the one that you're feeling?

That is the game.

i don't know what they mean yet