For some reason, and perhaps this is something you can explain to me, PAX events are dense with requests to bring back Rex Ready - even though the entire idea of the bit is that Rex Ready is a bad, dumb thing! But bad, dumb things are very much in our wheelhouse, and if someone wants more of that, well, who are we to say no. 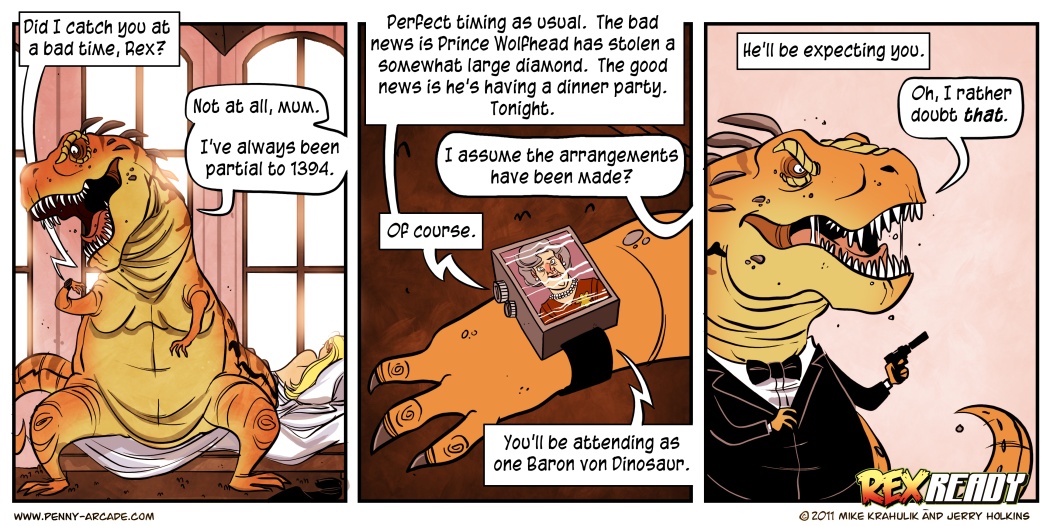 Alright, so, yes: David Gaider is a king, I think that's the accepted nomenclature. He dispatches ideological foes with such precision that his enemies are made famous. We've discussed the romantic elements. But what about those times when you aren't having gay sex with wizards? What then?

We (and many others) have discussed the limited number of digital "sets," samey trouble spots where a rotating cast of jackasses emerge.  I feel like that's more or less understood.  My tactical camera is always getting caught on shit though, and goofing up, and making it hard to select through doorways, but I can usually direct damage to the desired target. My problem is difficulty, and I can't really make sense of it. My fights are either non-events or beyond the level of my ability on hard, which lead me to tick it down to normal, where fights were either non-events or long and obvious, so I took it to "casual" even though I have a natural aversion to this term and the shame of it is inextricable. I think the problem is that I'm not taking enough advantage of the frankly ridiculous damage from cross-class combos, because I've been travelling the (in my opinion, much improved) skill trees in a more intuitive and less mercenary way, which is obviously not their fault.

I'm going to buy a stack of respec potions from the Black Emporium tonight and try to get where I need to be. Visually, I like what they've done; mages are certainly more demonstrative than they are typically represented, but even your run of the mill melee swinger is an engine of dynamic heroism. But it was difficult to perceive the combat as hard "challenging" as opposed to hard "this number is actually an insuperable barrier," and I wanted more story. It didn't feel like an authentic choice.

it's okay if you want out