We called up Pat Rothfuss, who was wasting away at some kind of romance convention, to show him our new strip before it went up.  It was important to us that he know it came from a place of love.  Gabriel wanted to warn people about spoilers for those who have yet to read A Wise Man's Fear, or The Name Of The Wind for that matter, but I told him - correctly - that if a person hasn't read these books yet, they are villains, and we need not concern ourselves with their writhings. 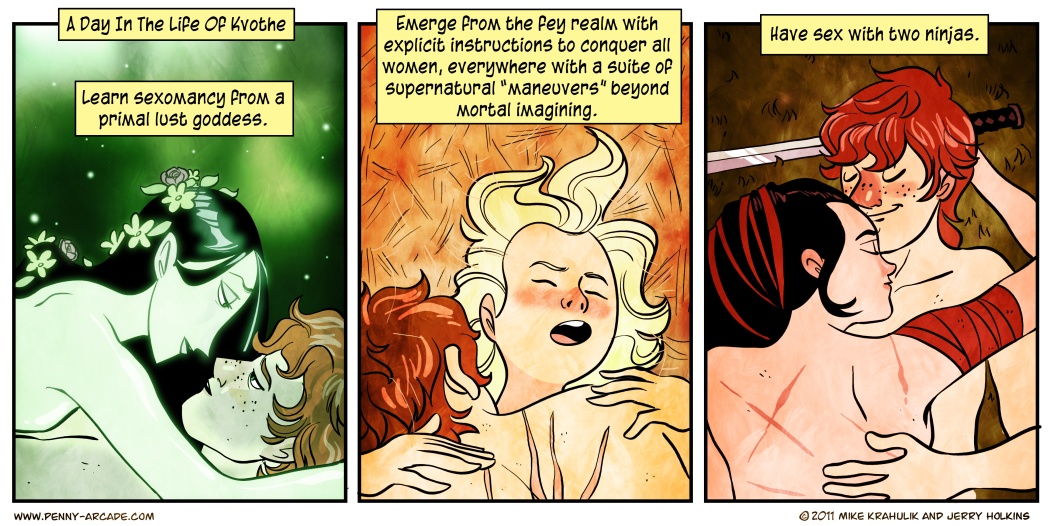 I have a well-known fetish for Free To Play weirdness, and I'm always delighted when I "have to" play one to see if it's worthy of our advertising space, but I tend to jump around a lot with free games. It's similar to the policy I have for candy sampler boxes, in that I will take a bite of each one, and then throw the box away. I thought it was because I just wanted a taste, and that's not untrue, but what I really like is tasting.

I like being dropped head-first into some batshit Korean whooziwhatsit and trying to figure out why we're golfing within the burning heart of an active volcano, or to what extent a lacy fan constitutes a martial weapon. This here is another kettle of fish, though: a cooperative action game, underpinned by crafting, a weird take on "player content," and incredibly appealing art. I always wondered what Three Rings would do when the time came to make their paean to the mainstream, and I was right to. It's horrifying.

The game needs the optimized modes of interaction that people expect these days, especially when it comes to a game which is thoroughly focused on crafting, weapons, and armor. You need to be able to link things to the channel, see what they look like before you buy or craft, look at what people are wearing, and you need an Auction House to allow for asynchronous transfers of property. Of course I say that, it's true, and I hope it does well enough to warrant these investments. But I'm still playing it every night, because (unlike most genre entries) its basic gameplay is fun. It's an action game you play with other people against the environment. It has all the hooks a persistent game needs, but the fundamentals are there, which you'd think would be more common than it is. Somewhere between Phantasy Star Online and Secret of Mana is a weird game made by people who live in a submarine which is (for some reason!) one of the most interesting games this year.

Ben Kuchera has done a lot of great work over at Opposable Thumbs recently, the kind of out there, inside baseball stuff he has a lot of passion for, and his piece on how early reviews for indie games can actually be injurious to sales was fascinating. At the core, it's about how (in our mysterious digital era) an early review - that is to say, a review delivered before the readers interest in the game is actionable - means that by the time the game is available for purchase the natural flow of the News Cycle has removed all trace of it. He spoke to Tom Ohle (who I met when he was working for BioWare, during the Cretaceous Era) about a game called Anomaly: Warzone Earth, specifically about how Tom had asked him to hold reviews, which generally speaking is something Big Publishers ask. My sympathies were activated, and before I had finished reading the article my purchase was already streaming to the hard disk.

It was about this time that I realized to the extent to which I had been played. I mean, I don't mind; the game's pretty good, and it was nine dollars.  It's Tower Defense in reverse, where the gameplay is in customizing your prowling Attack Wave and defining routes. I'm glad I bought it.  The angle of the attack was so oblique, though; I wasn't ready.