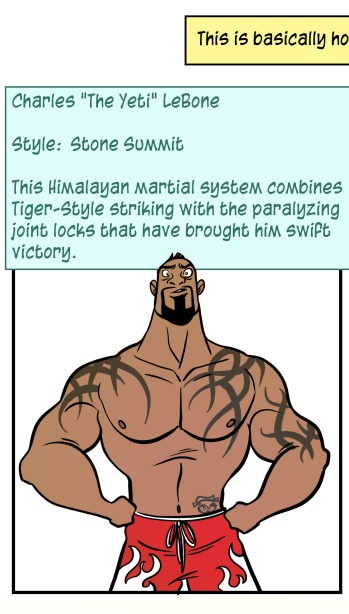 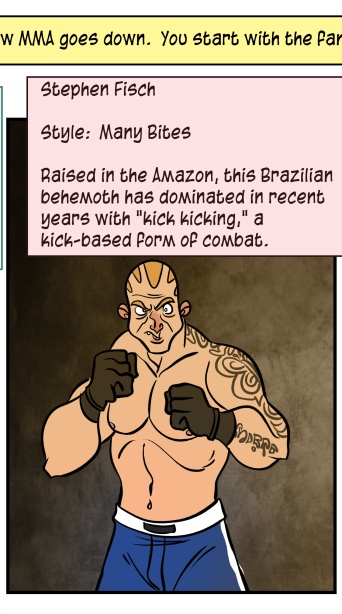 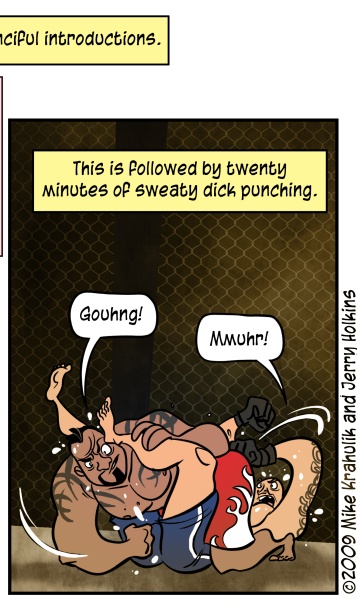 There was a point at which Gabriel and I decided we would be Mixed Martial Arts enthusiasts for some reason, and I don't recall exactly why. Fascination with "combat systems" is not out of the ordinary for boys of any age; and speaking personally, any new conceptual space is loaded with jargon, sparkling in rich seams, and fighting is particularly dense in this regard. I have an urge to begin simply listing the radical, mind-expanding lexicon of this space, but I wont.  Krav Maga! Okay, that one just slipped out. Glaive-Guisarme! I'd better get a new paragraph going, for real.

I gotta lock this shit down.

We rented a slew of videos and prepared ourselves for displays of incredible prowess. I don't know what we were expecting, exactly, some Wing Chun shit perhaps, but the matches we saw tended to follow a very specific pattern:

1. One dude, let's call him "He Who Is About To Lose," tries to rock some Wing Chun shit.
2. The other dude grabs his leg, and proceeds to bend his opponent's body into a shape we no longer recognize as human.

Reference the comic above for a detailed analysis of the rest of the match. Part of it is almost certainly that we (this is the greater, gamer-encompassing we, but also anyone who watches movies ever) have a somewhat warped idea of what human bodies can tolerate in terms of hit points. Even by those standards, we were not prepared to see how short the distance is from Point A to Point B, where Point A is a human specimen in peak condition and Point B is a wholly sundered being.

Given the prevailing cultural opinion, you would imagine that (given the quantity of videogames I ingest) seeing two people try to castrate each other on television would have no discernible effect, or maybe even soothe me, in some grisly inversion of the supposed natural order. So steeped am I in terrible violence that seeing a man's vas deferens hauled out of him, like precious copper from some doomed building, should be as gentle as seeing a formation of dandelion seeds sail by - but it isn't. I can't actually watch things like this. We pulled up a few videos while we were writing the comic, searching with keywords designed to create maximum amusement, and we saw fit to close the browser. It may be that such "look away moments" are the attraction of the sport, but in my specific case I am happy to look away - and continue doing so - as a matter of considered policy.

Since its release, I've been thirsting for a robust, blow-by-blow account of Dragon Quest IX. Specifically, I've been waiting for Jeremy Parish to travel through it - and that journey is now underway, in a main page article and a progressive piece that lives on The Grind, their fork-tender blog devoted to the Role-Playing genre.  I have fastened by bib - and now, it's time to dine.

when i go missing