Having committed themselves to in absolute terms to the replication of Blizzard’s back catalogue, it’s no wonder that Gameloft found their way to World of Warcraft eventually. The shocking part is that it actually kind of works. 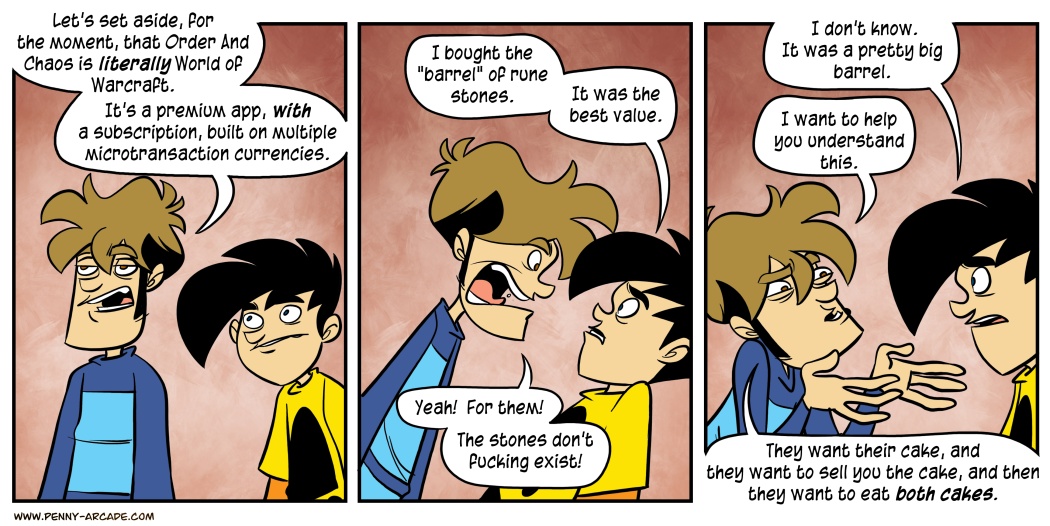 Getting your phone off the nightstand, doing a couple quests, and going back to sleep is either something which is appealing or appalling; you’d have a right to either. If you have questions about the way that it works and looks, typically it’s fair to say that it operates in a Wowvian manner, except where it’s been cleverly cut to fit a portable.

I would love to tell you that you should just grab it; you’d probably be impressed. But as we suggest in the strip, there are multiple tiers of payment. It may be that ultimately the game becomes free, once the premium “booster phase” of the client has fallen into the atmosphere. Between its two concurrent tokenized currencies - hereafter and forever known as Smurfberries - and a monthly subscription that kicks in, it starts to look less like “options” and more like “tentacles.”

Watch out for the concessions, though.

I think there might be too much information about the PSN Incursion now, apparently there’s something going on with SOE now, and there was a press conference or something. At this point, I already shredded the card; they can’t really get my goat, as the goat has been obliterated. Unless another shoe drops in the form of a comma delimited file full of plaintext credit cards or something, it may be over as a news concern. I want to give you a heads up, though, for the next round of Sony defense material which is typically indistinguishable from what they’d buy from a PR company.

- On the collapse of the Playstation Network:

“I’m a PS+ subscriber, and I don’t even care about this. I’m too busy enjoying the richness of this incredible, exclusive single player content.”

- On the revelation that the Playstation Network had been cracked open and the guts slurrrrrped out of it:

“What. The. Fuck.! Just move to a new city, cancel your credit cards, and then form new social bonds, beginning life anew in a faraway land!!!  This is a gift.”

- On the discovery that the intrusion has resulted in the dissemination of an infectious Hrungnir neocyte:

“All you people who wont submit to the mindpulse are f’ing morons. It’s like one parasite and you guys are talking about it like it’s some big thing or like “oh i don’t want to be a subjugant.” FFS, you guys. Just quaff the fucking Dominus Flask. Yield to Her. Yield, and be whole.”