We try to take a vacation of some kind after PAX, when we can, and now that an entire month of preparation has passed we're entering into the realm where such things are feasible. Where are we going? We have two strips that will detail the journey with frightful specificity, and the first of them goes up on Friday. In addition, as sometimes occurs, I have secured the services of an elite cadre to manage the newspost - beings whose unique character and experience are calibrated to nourish you in my absence. 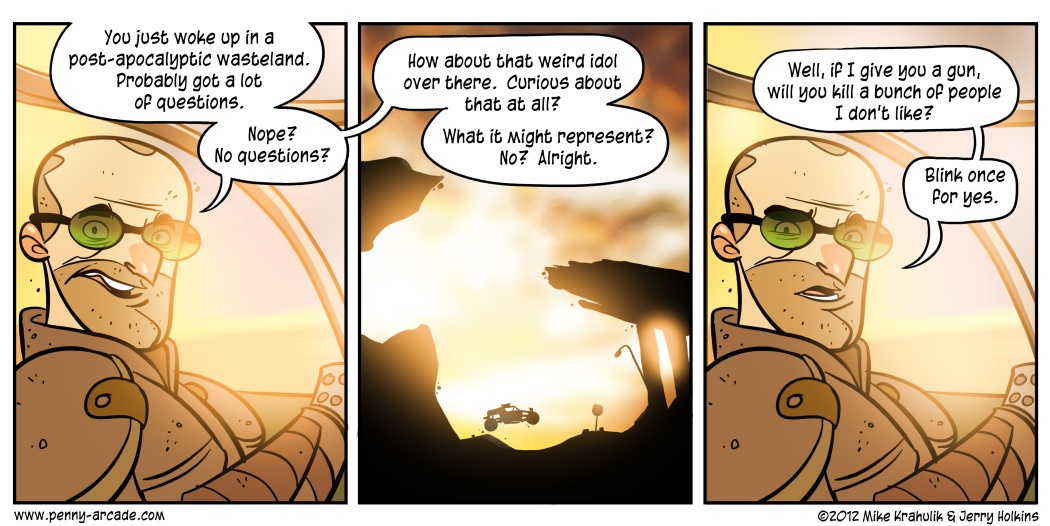 That's the intention! That's the intention. I never really know what to do with myself on vacation. I'm one of those people who always feels like they're doing something wrong if they relax, something dangerous, as though some omnipresent leopard were waiting for my guard to slip. Maybe there is a fucking leopard. There's gonna be a leopard packed into the overhead bin, and he's gonna expand in mid-air like one of those canned snakes.

Let's talk about something else.

We are (I think it is fair to say) flabbergasted by the technology in Rage. I'd use a more workaday word if I thought it could capture the sheer boogita-woogita, jowls flapping in slow motion nature of even the first few minutes above ground. An id game without robust configuration, or even what we might call configuration of any kind, was a real surprise - to alleviate tearing, Gabriel had to force vsync in the driver itself. Still flabbergasted, even without discrete sliders for Flabber and Gast.

I do wonder if we're done with silent protagonists, though. id games are always feel a bit retro everywhere but the renderer, and almost immediately you're presented with a scenario that affects the "solidity" of a world that is, in every other way, real. They've taken great pains to make it so, which is what makes this so strange.

I have sense memories from games that I must continually assess and say, no, that is not true; I have never set actual foot on the Von Braun. I swear to you that I can smell Raindance and Snowblind from the original Tribes. I mean, to this day I can smell them. Remembering it changes the way I breathe; sharp, but deep.

I don't like to talk about these things because it puts me in incredibly hot rhetorical water. If I am amassing memories of this kind, and I must analyze them on occasion to determine their veracity, to what extent is my consciousness shaped by them? It's not particular to games, in any case; I also know how a stillsuit smells. But I absorb these things. We absorb these things. And they stay in the meat.

Dark Souls reminds me of nothing so much as Zork. That's where all this sense memory stuff is coming from: I went down a staircase in Dark Souls, and by the time I got to the bottom I was eight years old, going down another staircase in The Great Underground Empire. The air was the same wet-cold it was then, and I didn't want to be there. I can't stress that enough: I was playing a game, ostensibly a device I had explicitly sought, and I wanted out. The young man I was and the man that I am made the same decision, then and now; I left. You could set your watch by my cowardice.

on thy cold gray stone 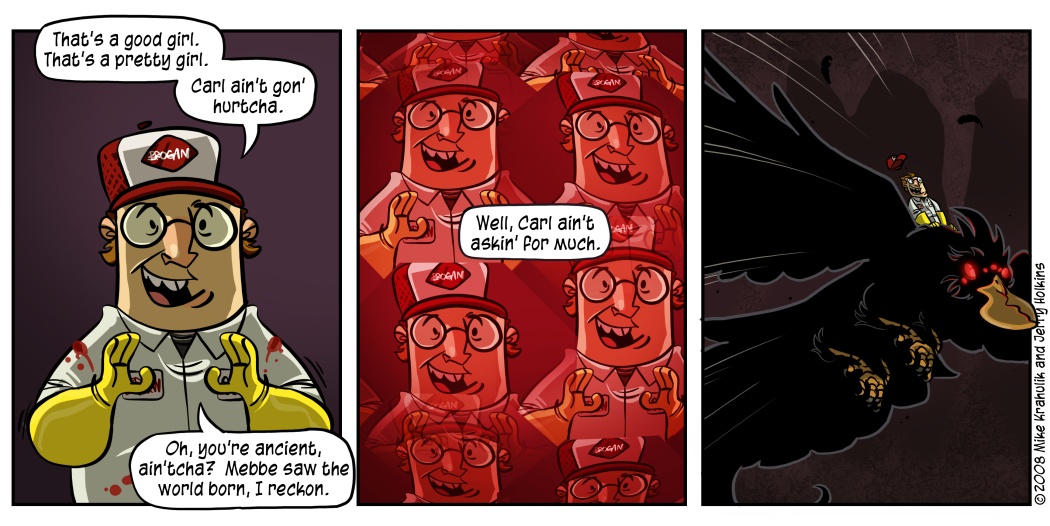