With Skyrim only a couple days away, and your evenings likely engaged in some kind of military or paramilitary conflict around the (digital) globe, you might not have had the opportunity to prepare yourself mentally for the rigors of an entire simulated life in Tamriel. Fear not. We are, as ever, your servants. 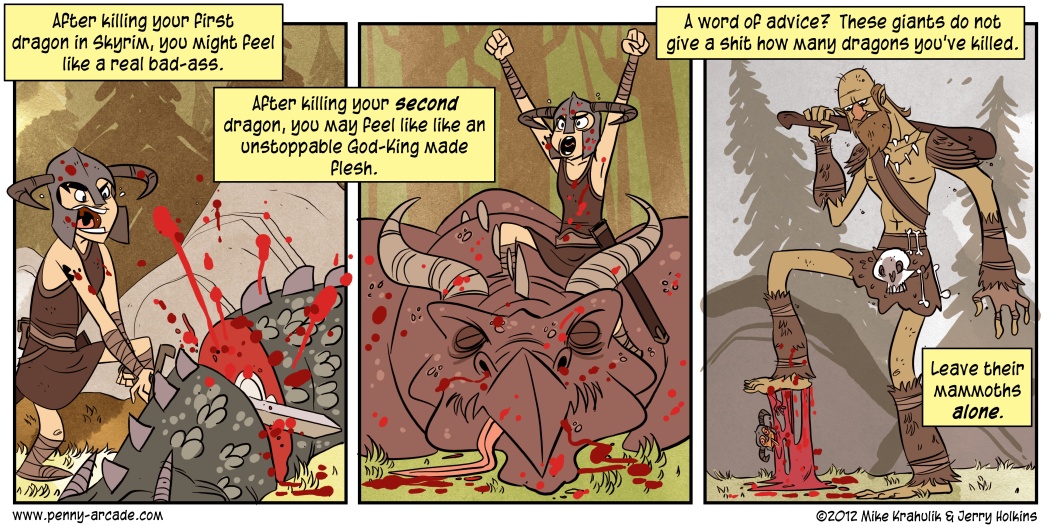 For me, the greatest pleasure has been seeing my long-time collaborator play it. I had a hard time getting him into the last one, and his lack of affection for things is communicable. But The Cycle is complete now, it doesn't need to be refreshed; he doesn't need perpetual coaxing to play amazing games, which was once the case. He had moderate to severe art challenges with Oblivion: the faces, which were previously made by melting tallow over a wooden substrate, now look like the sort of thing we associate with living beings. But, it's like... "amazing faces" wasn't the draw. The draw is that you can do things like contract vampirism, and become a vampire. What he's getting now is a case study in the difference between a sandbox and an open world.

Gus Mastrapa's "Things I Ate In Skyrim" is a well rendered account, a piece about eating which is savory in its own right, but you might be surprised to find during your own play through that you spend most of the game with a bit of butterfly wing poking out of your mouth. Cities tend to have something particular about them ecologically, which means new things to eat, and new things to eat means new things to learn about their alchemical properties, which are often injurious. It's true! Every strange root you find isn't something you should (strictly speaking) eat. But you will.

The way it usually happens is that I will roll into town in the middle of the night, and pick the entire place over for bugs and herbs I've never seen before. Then, I'll stand in the town's central fountain, eat everything at once, and trip my fucking balls off.