Gabriel's Windows Phone started a kind of chain reaction whereby Microsoft slowly began to repossess all of his apostate computing. You come to realize after awhile that you've been taking a kind of half-breath each time, and suddenly all those crazy/interesting/free experiences that were out of your reach can be accessed through the equivalent of a mystic portal right on your desk. 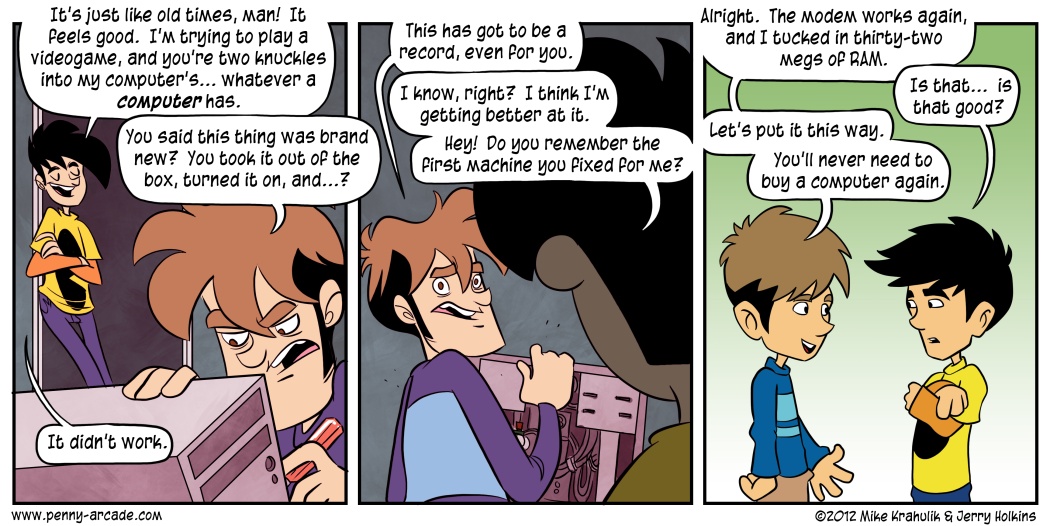 Assuming there is not a problem with the portal, or your cohort does not project a field hostile to electronics, or some other Goddamned thing. After replacing the SSD, I have determined that I can insure proper function simply by jiggling a SATA cable every other day. It's filthy/nasty, a kludge as it is sometimes called, but now the E: drive is visible! I say that because sometimes it isn't.

That last panel is a kick, huh? Wow. Talk about 6000 grit cornea polish. I was physically there when he drew those strips, and I don't remember them looking like that. In my my mind, they have always looked like the first two panels.

You should probably leave if you haven't beaten Mass Effect. No, don't read anymore. People got mad at us for "spoiling" events that happened in Mass Effect 2, and I don't have time for that kind of shit, so if you have a thpoiler allergy you need to G the FO.

To make a long story short, Gabriel likes his ending (green) and I'm fine with my ending (blue) but I understand how someone could feel cheated - especially if they got the worst ending, or if they aren't in the habit of reading classic science fiction.

There's a countercharge now, in response to anger about the endings, that describes Bioware's output as sacrosanct in some way - beyond criticism. This is fundamentally batshit, or as noted "speculative fiction" author Harlan Ellison might say, bugfuck. I'm fine with the ending, which to my mind started as soon as I ran the executable - the whole game is denouement - but I revolt against the idea of Authorial Divinity almost at the molecular level. I bet Ken Levine would take a redo on Bioshock, for example. To hear them tell it, there is plenty about Deus Ex: Human Revolution the developer would change. Fallout's "Broken Steel" DLC actually does modify the ending considerably. There's also a school of thought that says, hey, maybe these are not (strictly speaking) real endings anyway, and I'm always down for a rabbit hole.

They're very much endings of the Hard Sci-Fi school: work predicated to a certain extent on Interesting Answers but far, far more of a piece with Interesting Questions. The Interesting Question posed here is: what next? We know this is the question, because regardless of any particulars, the very structure of Galactic society is destroyed every time. And the alliance you've jammed together with gum, glue, and tape is now sitting in the equivalent of a ten by ten room, all of them armed to the teeth. We know that something survives, and lives well - "the Shepard" has passed into legend, and The Stargazer talks about interstellar travel as though it had all the complexity of crossing the street. But what next?

That is precisely the kind of question I like.