After a long, long stretch of games which more or less attempted to duplicate World of Warcraft, games whose white ribs now reach up out of the sand or have taken on some twisted new form - there's a crop out there in various states of completion that is showing us some new things. Well, thing. 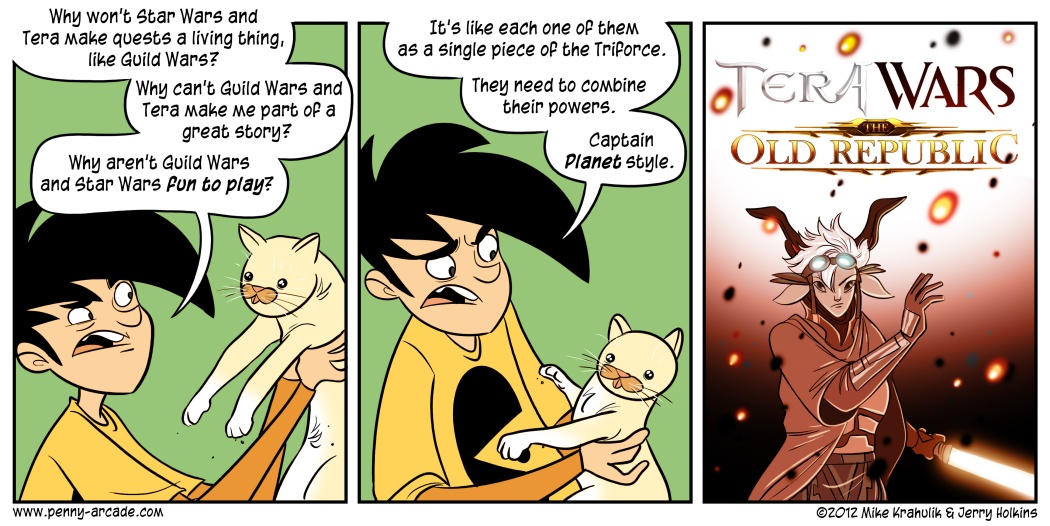 They're all showing us new thing.

That's less true in the case of Guild Wars, which is to say it isn't true at all; they've pulled up class roles, death, questing, weapons, and skills by the roots and fed them through a chipper shredder. They have a thinly veiled hatred for the status quo, which I respect in absolute terms. You get hooked on the writing and story production of a Bioware Game, and The Old Republic was no exception; both of these games have serious things to say about Player Vs. Player also. But the way you interact with these new ideas is the same way you have been interacting with the old ideas, which is by clicking on a whole lot of little boxes. This can have the effect of blunting their successes.

Tera, whose launch I'm substantially enjoying, is fun to actually play. It's not "fun" insofar as is it is satisfying, or addictive, or any of the other stand-ins for immediacy and player engagement. But it's dangerous to make all the bets at once, and while being fun can take some of the sting out off scraping off Kyrongi pelts, Tera has the point to point quest chain deathmarch stuff to keep players moving through the world.

I can't tell you about its endgame or whatever, I don't have any idea what it is. I don't know if I'll be playing it in a year. I'll tell you what Tera does do: it makes you ask hard questions of every other Massively Multiplayer experience. You miss these things when you don't find them somewhere else.

Still on my Kickstarter thing, and there's a couple really, really successful ones we need to take a look at: Zombicide and Ogre: Designer's Edition.

A few high profile Kickstarters, travelling quickly via the modern web and fuelled by an overwhelming affection for our own pasts, funded several games and created a powerful narrative arc. Double Fine and 2 Player Productions functionally crafted a new paradigm along with their offer, bringing in $3,336,371 dollars which we can all agree is a lot, with an average pledge of $38.29. inXile's Wasteland followed that up $2,933,252, with a higher average pledge of $47.86.

In both cases, people were purchasing the idea of a game - but in the tabletop space, which is also hopping, you can develop, prototype, and even release rulesets people can play at home now. Zombicide, developed by what is by all accounts an all-star team comprised of actual all-stars, is fully funded at $275,371 with an average $142.26 dollars pledge. Ogre is at $387,762, but with a 150.53 average pledge. Clearly people who buy boardgames aren't as sensitive about the price; plus, you only need one for a bunch of people to play. But I want to emphasize the extent to which these fundraisers were "designed" in such a way as to maximize individual donations. And it worked.

Oh God, did it ever work.

You've seen Stretch Goals before, if you've ever watched one of these things succeed: mechanisms to maintain funding momentum after success, with whispered promises of more. These have that, but distilled down into some wicked barn liquor. Stretch goals not at fifty or a hunrded thousand, like Stoic's Banner Saga, but every fifteen or twenty thousand. Goodies you can add a la carte, independent of your pledge level. They've essentially developed an RPG, where your money is the XP.

In these two cases, the stretch goals are of such a high quality that I think what we're actually seeing is the entire development lifecycle of the offer laid bare: what would have been con exclusives or expansions or preorder bonuses are simply laid out, the living spine exposed. That's not how this is supposed to work. And this, while we pick and choose winners like steam trays at Dim Sum. It's fucking unreal.

this is not helping me at all