People asked us many times how we chose Australia for the next PAX, and we didn't really; you chose it. We know how to run shows, that's it. "Where they should be" and "who will go to them" is your department, and thus far it's been an efficient division of labor. 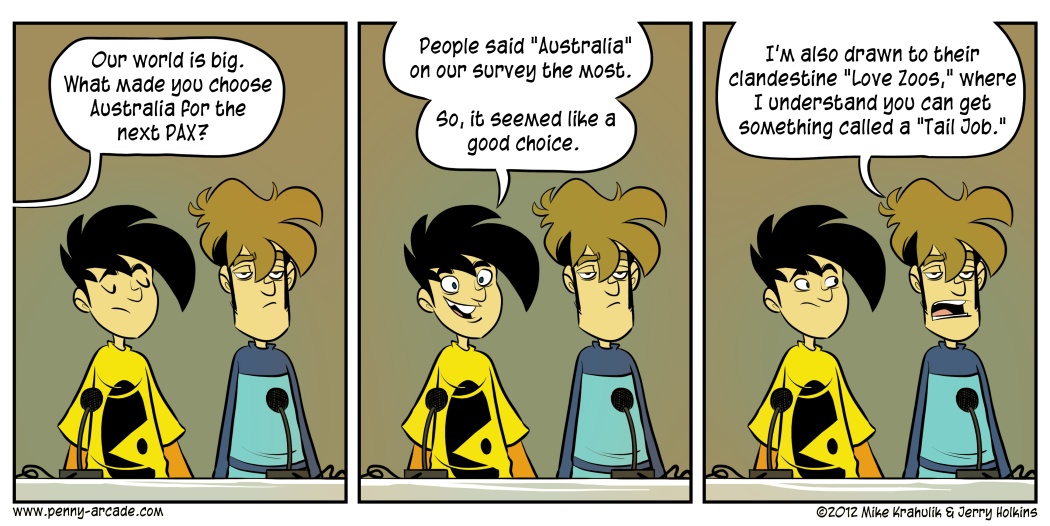 Talking to Scott and Kris after they got back earlier this year, they were positively aglow about the place. I gotta see how far away the closest Mana Bar is; I always wanted to go, but felt confident that would never happen. The new danger, I suppose, is never leaving the bar. There is always danger, it seems; we must be vigilant.

I spent a lot of time playing Card Hunter at PAX, and talking to Card Hunter people, and making a nuisance of myself, and then defeating the artist in Card Hunter multiplayer, which I believe reveals my secret divinity. But right next to Card Hunter was Mark of the Ninja, which is just as good in a completely 'nother way.

Ludwig Kietzmann over at Joystiq nailed it: what Mark of the Ninja does reveals are the systems of its stealth gameplay. We like to talk about how bad The Stealth Mission was in whatever game it happened to be in, but having played through the introduction of Mark of the Ninja I wonder if it's Stealth we hate, or Bad Stealth - mushy, bad, vaguely executed stealth that won't fully enunciate what we've done wrong. Psychic foes whose mystical awareness is total, in opaque environments whose simulation of our senses is incomplete. MotN tries to short circuit the usual failures to communicate by making sound and its position visual cues, and going 2D obviates many of the communication challenges. The free demo you play will almost certainly be what I played at the show, which means you will be purchasing it shortly thereafter. Maybe have a few points tucked away.

I asked when it was supposed to come out while I was playing it, and apparently it's coming out this Friday, which means that the show was very well positioned for them. It helps that what I saw/felt was excellent, but really, if the core of your marketing strategy is a text adventure I'm probably gonna have your back.

i hope that it finds you