This comic is a word for word translation; that's what makes it acceptable for us to reference Human Centipede two years out of phase. Technically speaking, Scott should be in there somewhere - it occurred while we were writing The Trenches. He'd told us about the absolutely vital South Park documentary 6 Days To Air, which is what started us down that path. 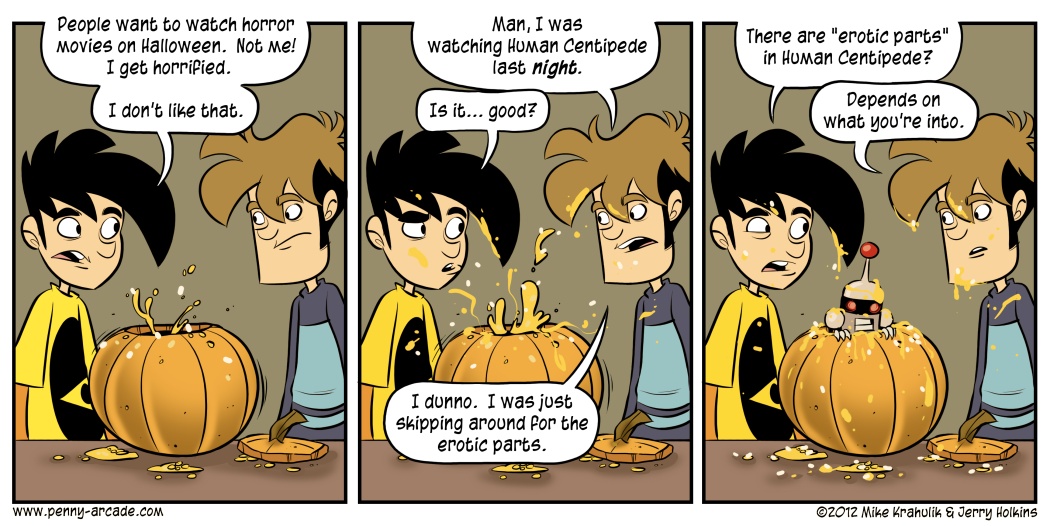 I do like horror movies, though, but my affection (generally speaking) is not indexed to their outlandish sexuality. Probably. I think.

It would surprise me very much if horror movies weren't endlessly granulated by their true adherents, in the manner of the audiophile, so even as an enthusiast I'm probably not equipped to discuss it on the Internet. But if we pull the camera out a little bit, there's evidence that Horror occupies a space similar to Role-Playing mechanics in that it is basically everywhere, in everything now because it adds an interesting texture to other types of stories.

If you have Netflix - that is to say, if Netflix exists where you are, because if it does you probably have it - you have access to such a treasure trove of horror you seriously have no idea. Brenna's not going to watch a horror movie, so if something like that is gonna get watched its gonna have to seep in at the borders via a channel of maximum convenience and instant stoppability. I mentioned the hybridization before because I don't even know if my favorite "horror" movies are even horror movies. They're horrifying, though; is that sufficient? I usually want my exposed organs suspended in some kind of narrative which can amplify slash elevate the base and animal fear.

If I confer any engram to you, let it be this: let me inaugurate for you an exploration of Korean Horror, even if you think you Don't Like That You can go very, very far in this vein and not hit the edge of it. Park Chan-wook's entire Vengeance Trilogy can be got via Instant whenever you want it, and these are ineluctable films. They're simply not optional. Give them a try. Maybe watch them during the day.