This is what is known internally as a "form" - internally being Gabriel and I, I doubt it's in wide use elsewhere. This is the "henchman" form, and there are many examples of it in the archive. It's simply too much fun to stretch a comic over this particular frame. It's a demographic with a ton of unrecognized problems. 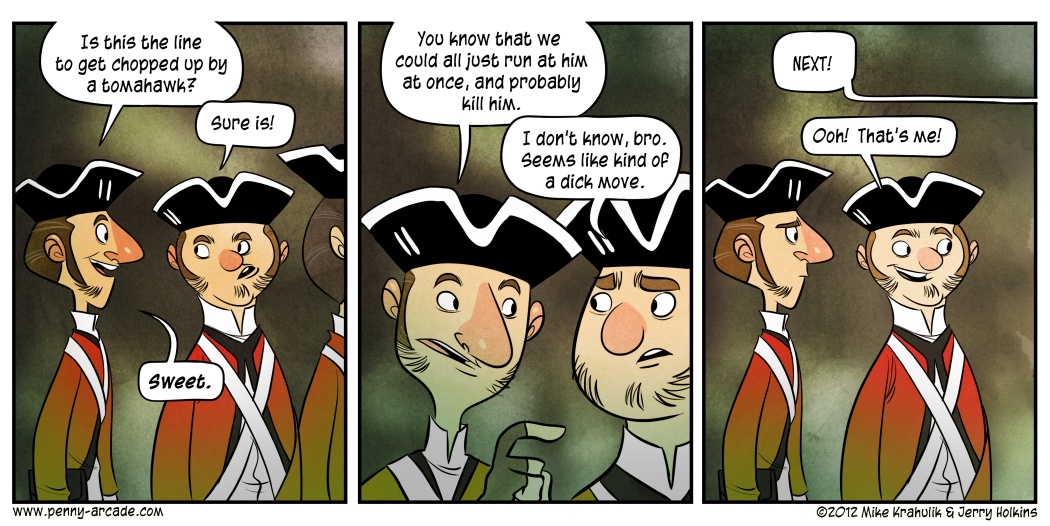 Gabriel gets about ten hours into an Assassin's Creed, any one except the first one, and he feels like he's gotten his money's worth. Multiplayer, also known as electronical Hide And Seek, might account for a few more. By that time he's typically worked through the bulk of the "art" which is his primary reward structure. I'm motivated more by slow-burn sources of inspiration, narrative stuff, which occasionally creates tension but as a generality allows us to accomplish far more in aggregate. It does make me sad on occasion that he can't derive nourishment from my obviously superior mode of consciousness, because Assassin's Creed 3 has a lot to say on a broad, broad array of topics. Alas.

This is something all couples must endure.

It's like Pokemon Black and/or White in that respect, or Spec Ops: The Line, where on occasion it has the temerity to question the fundamentals of your entire enterprise. This is a very strange thing to do to a person, to give them something, or sell them something, and then shame them for taking you up on it; it's a tremendously modern conceit. It's interesting, though, especially in AC3, because the cases it makes are incredibly eloquent. Not simply as a result of the period language, which to the modern ear effectively simulates erudition. No. Not always, but perhaps most of the time, it demands that you account for your motivations.