In truth, he made a reasonable facsimile of The Merch; I don't know to what extent that would have resulted in a comic strip, though. 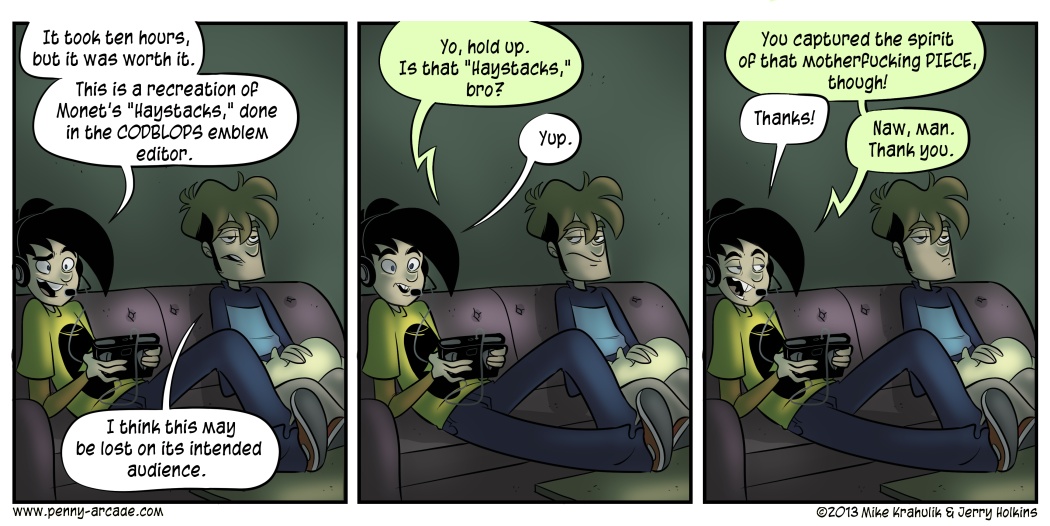 That art form - the construction of photorealistic or even simply recognizable imagery entirely from primitive shapes - is something we find almost incomprehensible. It's like when people do the shit they do in the Forza games. Nonsense. It's not hard to figure out what they're doing rationally, I mean, I have the capacity to do that. It's catching the exact moment their labors become what they're becoming that is so strange, trying to magnify and therefore pinpoint the molecule where the alchemy begins.

I am obsessed with miniatures games, tactical wargames, anything which purports to model complex systems really, and core to that obsession is the desire to BURST WITH SPORES and infect you with some variant of the same. The haunted bit is that these games are always some combination of brutally expensive and underplayed locally. A good group at a store is a true blessing, but if you have a problem where you get tantalized by the new shit you're perpetually screwed. This is why I threw my support so firmly behind the Kickstarter for Mobile Frame Zero.

At root, it represented a chance to push my predilections hard without the very real possibility of bankrupting you or leaving you socially isolated. The game itself is licensed under Creative Commons, which means (among other things) that you already own it, though you're welcome to purchase a hardcopy or drop their suggested price for the pdf. But since you build your own units out of Lego bricks, or out of any other damned thing, you're almost certainly ready to go for this weekend. It's clean, fast, fun, and isn't afraid of playercounts over two.

I was so taken with the project and its bizarre high priest that I wanted to back it for real; I was lucky enough to get in at a level where the game's official frame designer would build me a Company. I don't like telling creative people what to do, so I just said I really liked Cyclones and left it at that. Here is the result:

I have what I would call "annoying, borderline asinine" designations for all these things. Just as an example, the command frame - the one on the far left - is an MPB Leyline. See what I mean? It only gets worse (that is to say, better) from there.