Brenna's been packing since Sunday for Australia. Most of our personal items are arranged around the house in patterns which I assume have a metaphysical component - perhaps they focus H-waves, like a lens. I used to try and help with this process, until I realized that the best way to help was not to touch nothin'. When I pack, it's like, I put as many underwears in as I have days, and one pair of pants regardless of the trip's duration, and as many identical black shirts as are currently clean. I think of my backpack like a diving bell, or something: I'm not trying to live there, wherever it is, it simply furnishes whatever is required to exist wherever I happen to be going. 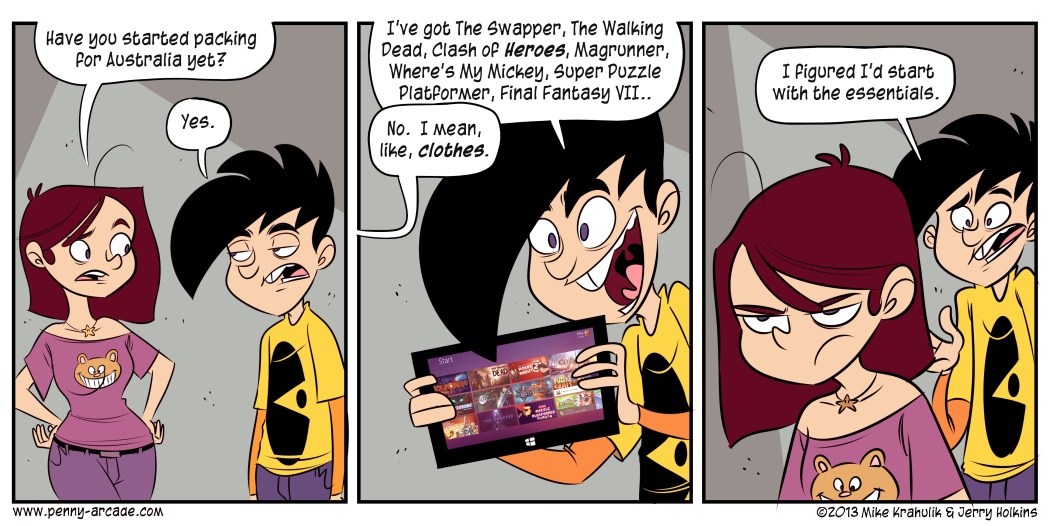 I tend to operate directly out of that bag. She packs like we are moving to wherever we're going, and then she unpacks first thing. She tries to make wherever we are home, which is very time consuming but it's also a really cool thing to do.

Thus far, Gabriel has not packed anything in the typical packing continuum. The Surface continues to pay dividends, in that the lion's share of what Gabriel is bringing to amuse himself is made up of PC games I demanded that he play weeks or months ago. I should make sure he grabs the 400 Days DLC for his Walking Dead though, because (as a kind of electronic short story compilation) it's a distillation of the things Telltale did so well in the first season. They couldn't really end it, but they weren't in much of a position to; it was advertised as a bridge between seasons, and it certainly does that. It makes you long for (slash deeply dread) more in a way that is rare in games. It happens, but there's a lot of "look away" moments here that you couldn't get away with in most other genres, whose "gameplay" constantly demands that you be in active control.

Fans of Strip Search - specifically, fans of Maki Naro, and I include myself in that number - take note. Monsieur Nareaux has approached Kickstarter in an effort to get his comic Sufficiently Remarkable off the ground. He's a compelling gentleman with a good comic jangling around in his nervous system, and we are in a position to assist him in its expression.