I was under some misconceptions about what exactly the "International Date Line" was, or what the charges might be, if any. Now, flush with wisdom, I understand that it is a completely ordinary thing and not even a real line. But that is no reason not to enjoy myself at my cohort's expense, or to deprive you of that same enjoyment. 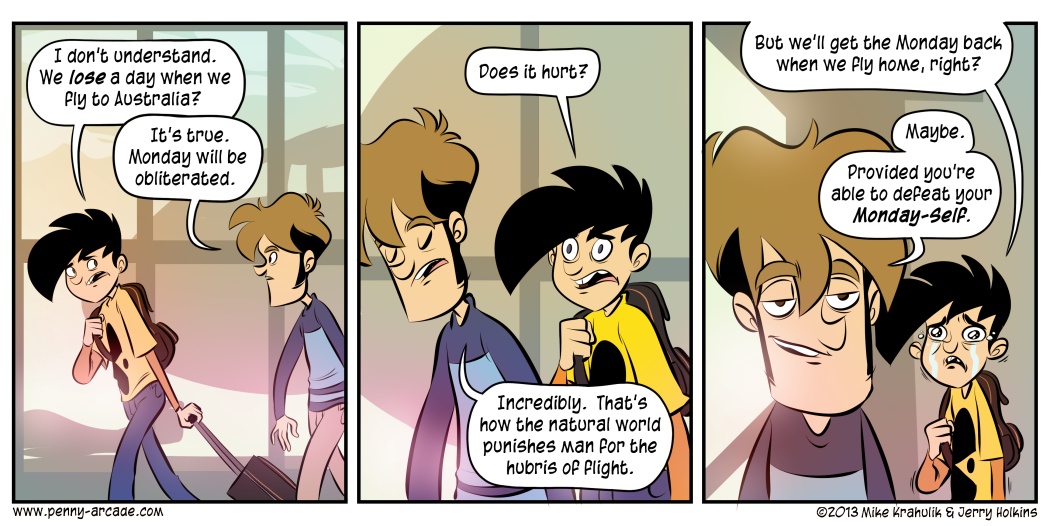 It's true, though. Monday does kind of disappear. Or, at any rate, it's experienced in a suspended Pandemonium Box that refracts time. I used to have a problem where I would go up in a plane and then be convinced of my imminent death for the duration; it's the kind of thing that really makes you want to stay home. I would have to write my way out of that horror, and the archive is littered with examples of that "genre." Medicine has more or less tamped that down, but ultimately there was also the realization that being in mid-air is the only time an adult can do nothing and it's anywhere near okay.

Since I don't get to Australia very often, it seemed like I should try to bring my family. At any rate, it seemed like I should do that months and months ago when I made the decision. At this particular moment it seems like the height of ambition to bring a three year old and a seven year old... anywhere, really. But perhaps especially on a day-long flight...? Are there any laws in the middle of the ocean? I'm wargaming a few scenarios.

I'm writing this on Saturday to make absolutely certain there is a post for you to read, because despite what I might have said re: my understanding the temporal weave I'm still afraid I don't. So I'm uploading it now, just in case. Hopefully I'm still alive; I'm not certain this post really brings the gravitas of a proper epitaph.

Sand starts this Wednesday - a project we proposed in 2010, but things needed doin'. I was surprised to learn it was that long ago when I plucked it out of the archive, but that's more or less the fate of Sand: we came up with it in High School, we've been meaning to do it forever. But the rest of the year is chockablock with "big" projects like this - Automata: Silverside (about mechanical slums) and Lookouts: The Tithe (about the Daughters of the Eyrewood) and Sand is only the first of them. Then, once the deck is clean, we can get back into doing the "pick your favorite" stuff the backlog wasn't letting us do.