I would have gotten here a lot sooner if it weren't for Cookie Clicker. Man, fuck that guy. You work so hard to ennoble play and craft and systems as aesthetics and whatever other Goddamn thing, but if you put a cookie on the screen and ask me to click it I will apparently do that for hours and fucking hours. I'm creating three and a half million cookies per second and it feels like the apex of human achievement. I stand atop a cookie ziggurat, my arms outstretched; chocolate lightning strikes both palms. 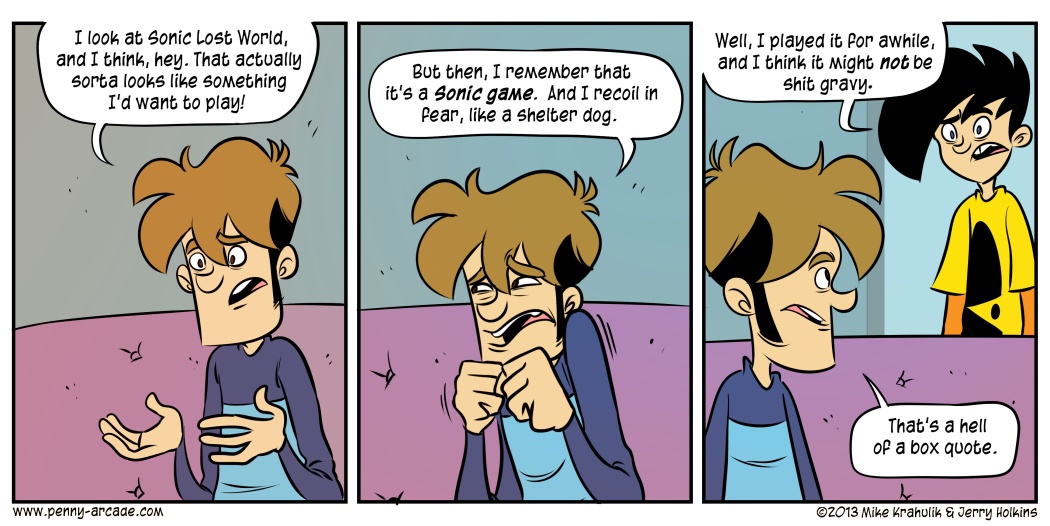 Jesus Christ; I need to go through all these business cards and try to remember what I intended to tell these people. I usually put them behind my license, in the little marsupial pouch, but there got to be more than I could fit in there.

Gabriel had almost no time to play anything of any kind the entire show, the regular old Cobbler's Sonundrum, but he did get his mitts on Sonic Lost World which so impressed him that he was willing to offer the franchise a temporary loan of goodwill, to be rescinded at the first moment of grimdark.

I went as nuts as I could, by comparison; I've watched the harvest from every game show I can't attend mount and mount and it was time. This stuff is going to leach at a steady rate from my mind, I'll get to it all eventually. Some of it, like Always Sometimes Monsters, I need to get builds for. Some I need to remember to Kickstart, like Chromancer. But today I'm going to talk about Titanfall.

Titanfall is how you sell a few hundred thousand systems, if you were wondering. You sell those systems because this is the "next thing" in the way that Halo was "the next thing." When you play Titanfall and then play a game that doesn't build you a custom robot in orbit and then shoot it down to you, you are going to purse your lips. When you can't jump and boost and wallrun and mantle up and make it all the way over the map - when you play a map with no roofs, and no interiors, just dirty alleys and mute, textured boxes - you're gonna frown. You'll swear, you will entreat God to damn them, but you're going to want to play what your friends are playing. You'll resent them for it. But this is how you drag people bodily to a platform: with a game like Titanfall.

I want to thank PopCap for hauling out one of their precious XB1 devkits for Saturday night's Peggle 2 round in the Omegathon, a nearly optimal play scenario that was surprisingly exciting as a competitive venue. I want to thank SpyParty's Chris Hecker, just get down on my hands and knees and thank him, for letting us use his game in what must have been the best final round since Pong. Ben has a much, much more detailed account of the event over at The Report than I can do here, loaded with Dabe Alan's excellent photography. You'll see the show that I see in those photos: the empty vessel, before people rush in, bringing whatever PAX is along with them.