It came up in conversation yesterday, but for some reason the closer we get to these new platforms the happier I am with the platforms I have. All the Orcs Must Die 2 DLC I never bought when it came out, like twenty dollars worth, is on sale for like six bucks right now. I had more than six dollars of fun with it last night. You can get a pack that includes all the DLC and the game itself for a little over six bucks. This is what I wrote about it when I was playing it the first time, and it holds up. That has to be one of the best deals I've ever seen, not simply as a mercantile transaction, but as a matter of dollars spent to joy produced. 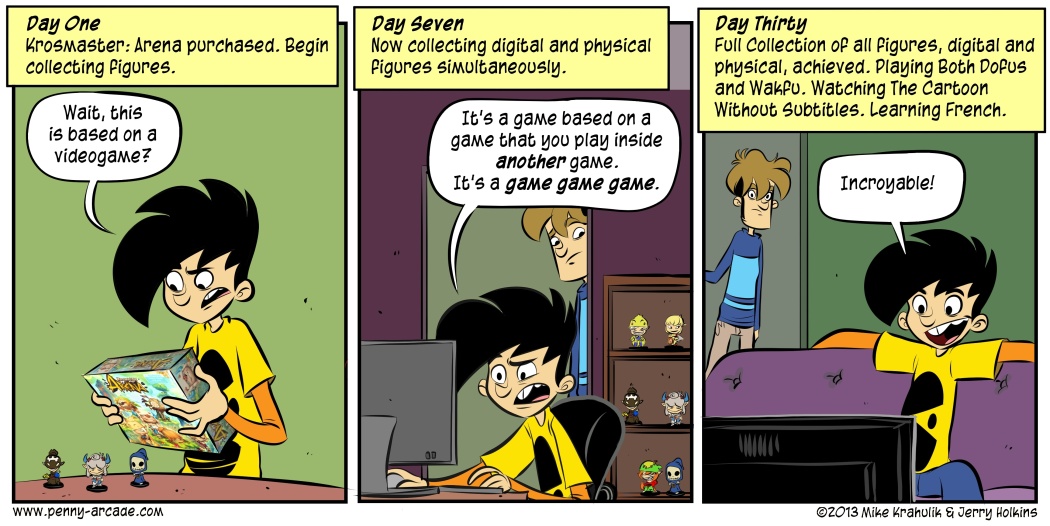 Every platform has this for me right now. Even tabletop, which must be considered the original "platform." Gabriel bought a game because it was beautiful, except it turned out to be incredibly savvy also; but it was like the glowing bulb on an anglerfish, and we ended up into these fucking people for all our free time and paying them to play their free games. We're on Wakfu now, which is an MMO for people who think the combat in World of Warcraft is too responsive and exciting.

I'm only kind of kidding. But Wakfu is in a continuum of products which seem designed expressly for mechanics fetishists of various kinds - imagine Final Fantasy Tactics where all the characters on the field are people's individual characters. It shares some things with the genre its ostensibly in, but there is a lot of really, really mutant stuff in here. It hasn't all been codified for me yet, which means learning constantly, which is what I want. Gabriel loves the art. We are playing a game with each other and we are somehow not angry.

I've been waiting for Digital Foundry to get their hands on footage from next-gen systems for comparison, and they finally have some. As you can imagine, these "materials" resulted in tectonic activity and shit got blowed up, etc. There is a Q&A which is a necessary companion. The whole thing reminds me of last time, where people were comparing screens to determine the true resomolutions. People see what they want to in these things. The PS4 looks better to me, but the Xbox doesn't look as bad as I expected after an essentially tireless campaign.

I talked to somebody I know over at Microsoft yesterday, and asked them how the apocalypse was going, and they said that, in fact, no. This is not the apocalypse. Red Ring of Death was the apocalypse. That's where they're calibrated on this stuff, which explains a lot.

Easy battery switching, a simple way to build parties across games, and a generally superior multiplayer experience kept me on the 360. When I say "generally superior multiplayer experience," I'm not talking about the racists. Although it's clear that by any objective measure, Xbox 360 racists are in the top of their field. Their bigot game is pretty tight.

We're talking about what a blood-mad warlock would call "platform differentiators." What is it like to live with one of these systems? If it all came down to performance, the history of this field would be very different. Sony seems to think that I want Facebook style social feeds, Microsoft thinks I want apps peeking in from a side panel. Their controllers feel very different from one another. They have different ideas about what constitutes the role of the system in a home, and it'll take years to know how these bets turn out.