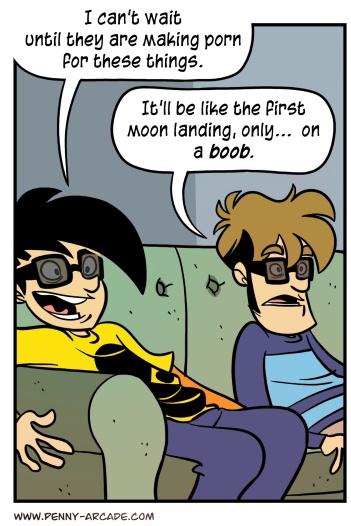 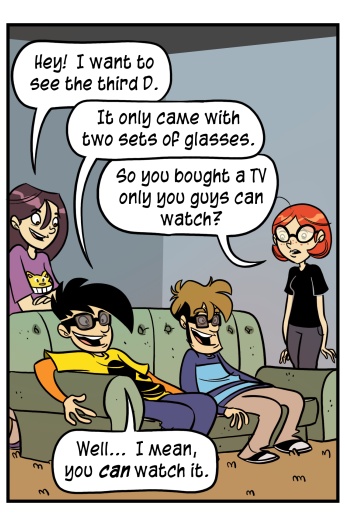 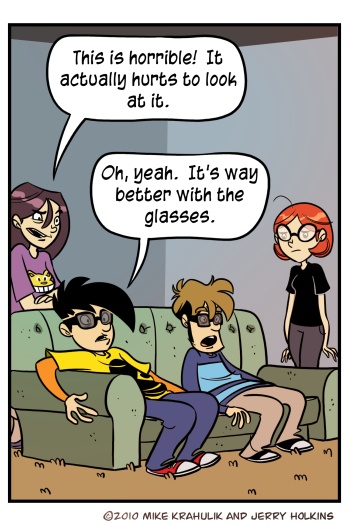 I don't know exactly how prevalent "Sony Style" stores are. I know of exactly one in my town, and one in another town. If you have one close, if such a thing exists, you should certainly make it a point to penetrate their outer defenses and watch their astounding 3D demo reel. I've seen plenty of demos for 3D televisions, really quite a lot of them, and they've never managed to accomplish what this one did.

I watched it fully three times through.

Glasses were limited, which mean that husbands would wear them while wives knit their brows. Like Feminist Hulk, I have no truck with the Gender Binary. But that is something that happened right in front of me, multiple times in rapid succession, and it's not going to be the last time.

As usual, you can run into problems with particulars. Generally speaking, when you ask a system to render the same scene twice, unless you are some kind of Turkish sorcerer something typically has to give. Reports that came out of E3 this year regarding Sony's 3D manifesto delivered varying levels of satisfaction, and depending on the article you read the compromises nettled to varying degrees. At Sony Style, the Motorstorm portion of the demo reel is stunning, but it's not being rendered - it's just being spooled off the disc. There's no way for us to discern if it represents an authentic experience. I'll be God damned, though, if it didn't represent an appealing future.

We have asked Robert if we can get a 3D television for the office, for testing mumble mumble, and he has suggested that if we "are very good boys" we might "get one for Christmas" which means "No."

I am not a "Dragon Quest Man," I have always thought of myself as a "Final Fantasy Man," but since I haven't managed to fully enjoy a Final Fantasy since XI maybe I'm not a Final Fantasy Man either. Since early days, though, I've been fascinated by the pluck and vigor of Dragon Quest IX - one of the world's biggest RPG franchises, one that warrants a devastating next-generation broadside, choosing to make its home on a portable.

I snatched it up at around eight in the morning, thumbing its manual for wisdom, but keeping an eleven-month old from killing herself is a full time occupation. Slimes were safe for the better part of the day. This made them lax, and fat for the harvest.

Because I am not a Dragon Quest Man, having only experienced dalliances at various times, or been exposed to real fervor on the part of its adherents, I don't actually know which things I'm supposed to get excited about as a "true fan" so there's always a low-level vibration of reflected joy. It reminds me of when I was in the Vatican (it's vatical!) and not in any way Catholic. I felt certain that I was walking through a building utterly fashioned from congealed history, but I didn't know how everything was connected, so I began to knit things together as they were presented. Here is the statue of Saint Guy. Here is a Grim Reaper, made entirely of bones. Maybe he's the Final Boss? I mean, he is death.

it's war on everybody