My co-conspirator Mork Krahalo one hundred percent cannot explain what it is that keeps he and his son affixed to Super Motherload. He has described it to Kara and I on more than one occasion, with mixed results, to the extent that now we understand what on some level but not why. 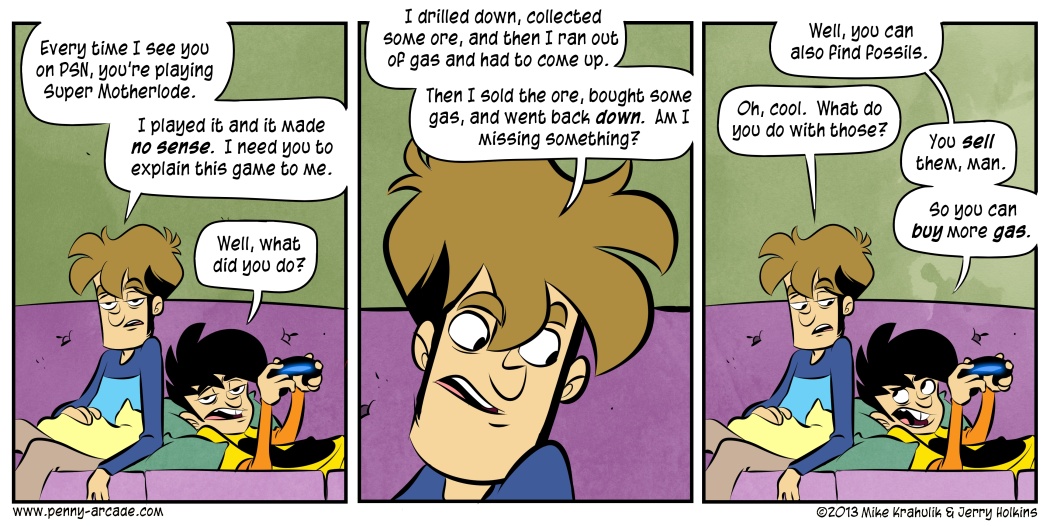 It doesn't need to be understood in order to be fun, necessarily; that is simply my fetish. You should get it, maybe, and then explain it to me.

We had a fantasy wherein we would make a comic about Need for Speed Rivals. We couldn't, because of "The Good Game Problem," where talking about it just makes you want to play it. Making a comic, for us at least, requires some kind of texture to be present on it somewhere. It's too smooth. If I were getting disconnected constantly, and not just a couple times, we could have gone that route. It's not like Battlefield 4, where I haven't been able to join a Conquest game for the duration of my PS4 ownership. And please recall that it's my preference generally to play games on computers, where shit not working is reg'lar; they are less "gaming machines" and more loose affiliations of silicon which are occasionally embroiled in internecine warfare.

They've got the "caRPG" thing dialed in so hard it's almost impossible to escape the delicious effects of the mechanism. You essentially take on quests, and earn experience, which gives you more cars and quests. It has the "second screen" thing people seem to have a hard dick for these days, but I've never gotten around to it. Not even because I don't want to. It's because I would have to stop playing the game, which I won't abide.

Where they really have me strapped down is in its basic bifurcation: Cops and Robbers, or "Racers" in this manifestation. You play one or the other, though you can switch if you want to the other "career." They feel different, at root: Cops earn experience points by driving well and ticking off quests, which gets fed back into the loop. Racers who drive well build a multiplier for the points they earn, but if they're apprehended (read: pulped, Burnout style) they don't get shit and the officers take their points. Racers also have vastly more capacity to augment their cars. But the way they've incentivized each here is exquisite, and it's fun to smash and outwit the racing equivalent of AI "mobs," but when you contend with a real person on these streets - and you will, because you're always online - you will contort your body to eke that much more out of the corner. It's got a firm grip on me. Holy shit.

Like I said, you can play as both, but I don't really. I fucking hate racers; I hate them. I actually think they're bad people. If you look behind you and see a Ferrari Enzo with an OBELISK plate, just pull over. If you make me chase you the fuck around, I'll make sure it goes wrong for you.