We'd seen the Kickstarter for Bible Adventures: Call of Abraham mentioned all over, and it reminded us of The Bible Online strip we'd done a ways back. But that was very much in The Far Side vein, single panel type stuff, and I thought there was room to investigate it further. The new game is more of a single player RPG, but we couldn't leave well enough alone. That's correct: in our humorous .jpeg, we were less than entirely factual. Call the police. 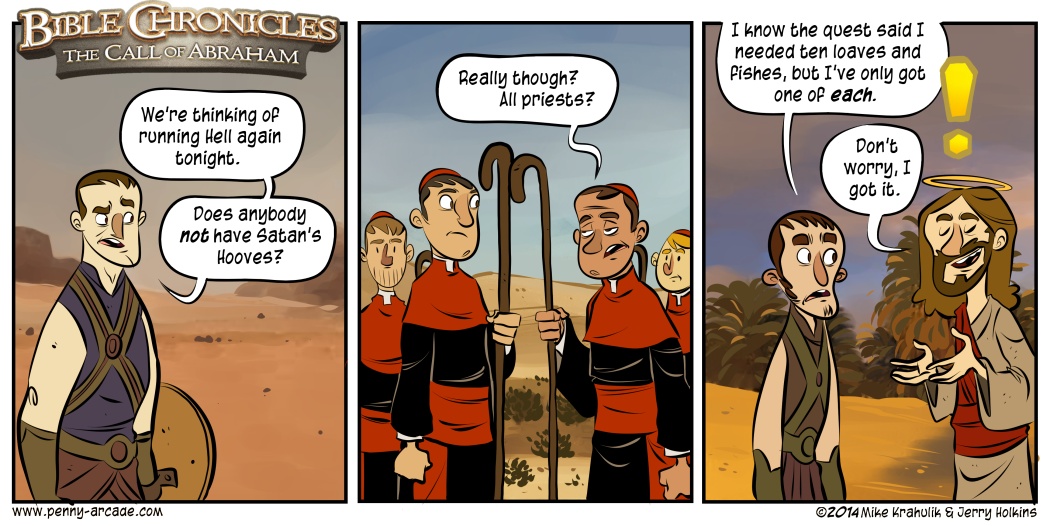 The pitch is poor; we may accurately call the offer they've made of Bible Adventures: Call of Abraham a Kickstopper. I bear 'em no ill-will. We talked for a very long time in the 4th Panel we filmed for it about the ways in which their whole deal places the Jesus Cart before the Game Horse, and the results are inevitable. It won't be in a position to deliver its spiritual payload because it either won't get finished, or because it's not engaging enough to establish rapport.

Then I read the pitch again, and remembered a bunch of stuff about that context. I grew up in the kind of Christianity these fellows are pitching, so I know some things about it. There are really two philosophies as regards the creation of sanctified cultural product: there are those which are produced to lure the heathen, and provide succor to the faithful. You see that in bands which are "Christian," but you have to find out after the fact: lyrically, the message is… diffuse.

But there is another approach, which is to create a sanctioned, sacred parallel culture inside the greater culture. That's what this is. So you can judge it against whatever metrics you might leverage as regards things like "quality" or "framerate," but you can't compare them to the corrupt, demonstrably toxic effluvia of the secular world, because those things actually start out at minus ten million devil points. You have to compare it to the spectral, nega-games which don't exist and constitute the true competitive landscape.

I think it's possible to do both, frankly. We confuse difficult for impossible every fucking day. But I don't know if these guys can, because for them, the "game" is a vector - not a thing in itself.