All attempts to scam a copy of Infamous: Second Son early failed miserably, even though Kiko made an awesome coat for the game. I don't know where all you get to go in the game Seattle-wise, how far out into the places I'd know well, but I loved Keek's expert insertion of our old stomping grounds - specifically leveraging our actual Lenin statue to reinforce themes of revolutionary fervor. 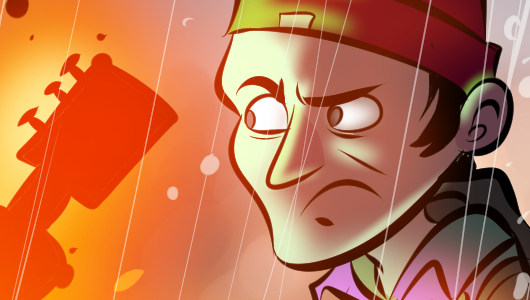 If you're ever at the Lenin statue, just by the by, right behind him you can get Turkish coffee at Sinbad's, or grip sandwiches which ball fully out of control at Royal Grinders. They have good gelato at RG, too. Their "Strawberry Jalapeno" seems like something you should avoid, something that might be better leveraged as a riot control agent, but as long as you don't get it in your eyes it's pretty good.

We've done a few comics about the inFamous series. Near the end of the first game, there is a mission where you are given a choice: save your girlfriend, or save six doctors. I, uh… huh. I guess what I would say about that is that it is very difficult to take it seriously, even inside the comic framing. I love these guys, though. They beat us super bad at Ping Pong. They made Sly Cooper, which is an all time favorite. Did you know they asked me for a writing sample when they were doing Sly 2? Nate Cox, the guy from the gif, used to live down the street from me. I went to a house party he had, and Tim Shafer was upstairs, and we talked for awhile and it was cool. Essentially, I've always got room for them and I never won't have room.

We have a difference of opinion, I believe, about street musicians but things like that happen in relationships. You move forward.

Gabriel and I loved watching the video review at GameTrailers, you might find it useful also. I have been to some of these places, and I want to go back to them, except this time as an omnipotent fire god that is always cracking wise.