When I look at most definitions of Apophenia, I can't tell if the word has any opinion on whether or not the data derived from the random stimuli is actually there or not. But then, I think words have opinions. So. There was a time - not that long ago - where we saw lightning, and assumed someone threw it. Probably a dude. This shit is in the firmware. And it's there because occasionally, sometimes, every now and then, it pays dividends. 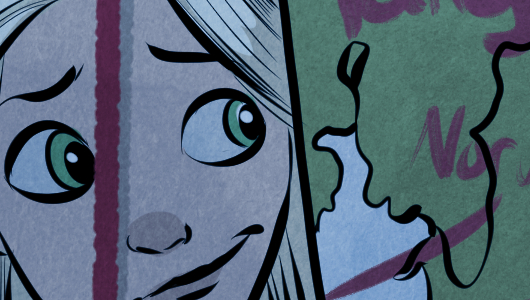 For all my excoriations of today's mercenary Freemium manipulation engines, I leverage nonsense currencies with abandon in my own house; we need an app to track them all. The young people in my dominion can exchange some volume of these bafomdads for a Movie Night, but we could just as easily change the entry to "Watch Frozen Again" because that's all it's ever been used for. I noticed on the most recent viewing that there's no steam when Elsa breathes in the cold. That took three watches. What else am I missing? Depends on who you ask, really. My Disney game isn't on that level.

Oculus selling to Facebook wasn't a thing until after we wrote the comic, and if it hadn't been halfway drawn maybe we could have switched gears. There's still room for a comic on the topic, though I find it more interesting than hilarious. Give me an hour to think about it, I guess.

There is nothing more mainstream than Facebook. A piece of technology is not truly mainstream until Brenna uses it daily - understand that a chromed ant trail of technofetish gear is constantly paraded before her, she always sees it under optimal usage scenarios, and it wasn't until Facebook as an app that her usage pattern mirrored that of the early adopter. There used to be very serious strictures about the usage of smartphones during meals, or while out, and none of those apply anymore. To her, anyway. And I'm not going to fuck with her about it, because now she knows what I know. What we all know. It's what I've wanted for years: it means something to her.

Before yesterday, The Oculus Rift was technofetish gear. It ceased to be so in an instant. If you want to know how you get to the future described in books, any of the futures, it happens when technology has broad social meaning. I'm not going to tell you it's not fucking weird. I'm as surprised as anybody. I don't like the idea of a fully three dimensional banner ad anymore than you do. But do you want to live in a society where telepresence and virtual reality are… normalized? This is how that happens. I used the shitty, old Rift, and I thought I was underwater. Think of every corner they had to cut because they were trying to make this thing in the finite realm of men. Now imagine the corners restored, and the corner cutting machine in ruins.

I've turned down twelve million. But I couldn't turn down two billion, because that's not a number. Two years ago, when they Kickstarted this thing, this kind of momentum didn't exist. It's happening, really happening, like in the Ron Paul gif. It didn't stop happening. I would argue that it is happening more than ever, on every axis that we determine happening...-ening.