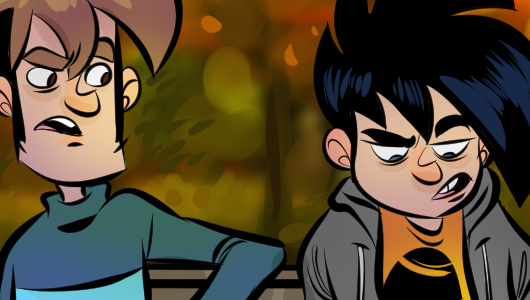 I saw a lot of stuff at PAX that I still haven't written about, because September was the most fraught month on record. The sixth floor typically represents a bizarre mix of stuff; I even met Notch up there a couple years ago. This year Greater Than Games was posted up right next to the PAX 10 which was right by Labratory, a nanoscale game foundry I've been meaning to tell you about anyway. BUT!

On the way to that room, I saw a little booth upon whose televisions leapt a princess and her doting fiance, except I didn't recognize either of them, and when something has eluded my ravens I always lean in close. Developers can feel as much as see this lean. They know that every sensing device I have is flooding their hard work with coherent r-beams, and they lean back toward me. I was glad of it, too, because it looked so rad. I make things too, very simple, small things, but interaction is often orthagonal and frankly unwelcome in my deal so those who would court this force fascinate me.

The game he was showing is called Chariot. You can play it solo - like Lara Croft and the Guardian of Light - but, like Lara Croft and the Guardian of Light, I can't imagine why you would. It's really a (couch) co-operative physics puzzler about hauling a fussy, hypochondriac ghost-king to his final resting place. Look at this fucking trailer! That's precisely what I want. You can buy it right now on PS4, but for some inexplicable reason it's the October Gold Freebie on Xbox One even though it just came out. I'm not going to complain.