We're working through a backlog of Child's Play strips bought at auction, and Pat's got dialed in first. Pat, as rendered here, is our friend Patrick Rothfuss, whose book arrived in the mail one day and I have been a fan ever since. I judged that book by its cover, The Name Of The Wind, and was well served. Pat has also undertaken many excellent turns as Viari, noted sub-employee of Acquisitions Incorporated. I think someday we'll do something big together. For now, we've got this! 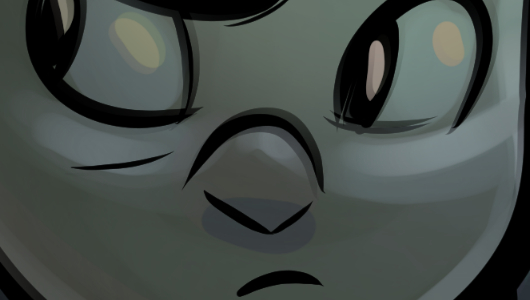 Pat actually knew more or less what he wanted, and it went through a couple edits, but when Gabe started drawing the middle panel he fell in love with it and only wanted to layer on more detail. The original script went like so:

Tycho: What were you thinking of for your Child's Play comic, Patrick Rothfuss?

They both look over the pages while Pat reads:

"Bring your best tools. Iron and fire.
Call upon your oldest lore.
You will seek what you desire.
Deep beneath the forest floor."

Gabe: How about I draw you as a goat instead?

So, now you know.

Let's take a second to really consider how insane the new Rainbow Six is.

I really wish that I had said it when the first material came out, but I didn't, so you'll only have to take my word for it: it always seemed like it was going to be multiplayer only. After they jettisoned their original plan for a high-stakes shooter based around moral choices which I loved and will always mourn, Siege materialized to fill that void. When they showed a traditional intro style video at E3, I thought, oh, maybe there is a campaign. But no. And so, like Titanfall, it could be brilliant on its own terms but still suffer as a "value proposition" which is a phrase that feels dirty in the mouth.

I have so, so many questions for them. Was it going to be free to play, but then made a late turn into retail, like Overwatch? Currency starts out tight, so tight that you'll probably watch their three tutorial videos (like my kids might watch videos in Angry Birds) to secure precious coinz. That feels, uh, kinda weird in a sixty dollar game, but… okay. I've earned plenty since.

But there are other things I don't have questions about at all. Generally, people try to make their games more like Call of Duty, and nobody gives a shit about that here. This is a simulator by comparison and may even be a simulator in truth. Trying to spray people with bullets is not really the thing. I also understand why there are only ten maps - even ten might be too many. These aren't like the maps you get in other games. They're at least two concepts overlayed in the same place, and learning how to make these spaces strategically porous might be the game. I might have started with six, and added a map a week maybe, which would have brought up the "value proposition" concerns I alluded to earlier I suppose but that all happened anyway.

Genres are real, and it's possible to sort of fill in the blanks when you're writing about something. It's sort of like Delta Patching in a way - there is so much overlap that the information I really need to know lies in the distinctions. Right now, I am orienting my dish to receive maximum signal from the game - Kiko and I want to find it. I think we might be alone in that, here, but that's our traditional role. We find things, set up camp, and then signal for the others.

Where Siege isn't aggressively old school, it's completely out there stuff - like you would expect from a mod team, not from a "triple a." Weird shit from dudes on Adderall who are making games when they should be writing college papers. It's not business as usual, in fact, it is aggressively opposed to it. There's a reason why people hew to business as usual, though. I love that this was allowed to happen while simultaneously wondering if they regret their decision.