I think we're at the end of Doom now; or, if there is something worse than the thing we're fighting now, I don't know how much I want to see it. Jesus Christ, people. If we can pulp this Hell Person, I'm of a mind to head straight back to the main menu and jump into a new campaign. Gabriel has suggested he does not do this; I don't do it either. 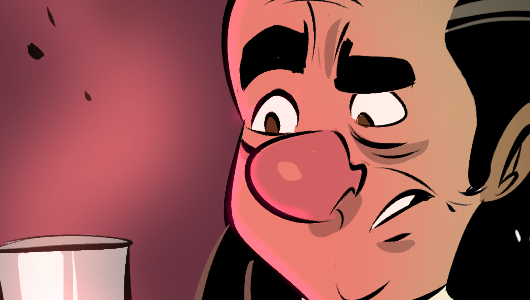 The story is so gloriously dumb. Good God. They know it, too. There is a voice on the intercom that sometimes tells you there's too many demons. It's not clear what a good number would be. Somebody at this Mars company had to record that line - that's how likely they thought it would be that there would be too many demons at some point. Also, Hell Energy. That's how you know they're not trying to be clever, and failing, which is what usually happens. It's Hell by way of Andrew W. K., and I can't wait to go back.

Hey! So, Gabe is working on his coloring book, but I'm working on a book also, with Gabe. I think I'm about halfway done with it, maybe? I don't know, I've never done anything like it before. I really had a good time reciting poems at the last Acquisitions Incorporated game - you can watch the whole thing, or skip to 2:39.20 to see what I'm talking about. Maybe listen to it in your headphones. I don't know how it works where you… like, work.

I didn't really expect to do whatever I'm doing now. It was my intention to write poems, occasionally sing those poems, and then die early. It didn't work out like that. I need to fill this interminable twilight somehow, and this is one of the ways I'm going to do it:

I'll "bind" these up somehow and get them on a digital bookstore in an electronic slab, I've got tons of them. Essentially I want to be Shel Silverstein, if Shel Silverstein needed his best friend to draw all of it, and if he really liked Dungeons and Dragons. Shel Silverstein, Mark Twain, and Neal Stephenson, all at once, in the same person, but with the regular number of limbs. I feel like it's weird otherwise.